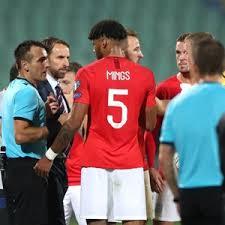 Six Bulgarians have been detained over racist abuse at a Euro 2020 qualifier against England that sparked a storm of protest and led to the resignation of the country's football chief, police said Wednesday.

Monkey chants and apparent Nazi salutes overshadowed England's 6-0 win in Sofia on Monday, with the match halted twice during the first half due to the abuse.

"Six people have been detained and another three are being actively sought," Sofia police chief commissioner Georgy Hadzhiev told journalists.

Hadzhiev added that so far 15 people have been singled out via CCTV at the Vasil Levski National Stadium as being suspected of directing abuse against England's black players.

Penalties for the offences carry brief detentions, fines and bans from sports events.

In total, 15,000 people watched the match at a stadium already partially closed after racist incidents during games against Kosovo and the Czech Republic in June.

England manager Gareth Southgate told reporters after the game that his side had been ready to walk off the pitch if the abusive behavior continued but players decided to complete the match.

The incident sparked a storm of angry reactions from fans, media and officials in both countries.

The scandal divided Bulgarians -- while many apologized in posts on social media about what they said was a pervasive problem in the country, others refused to be identified with the offenders and condemned British media headlines that called all Bulgarians "racists" and "animals".

UEFA announced that it was launching a probe into the behavior of both the Bulgaria and England fans. Its president Aleksander Ceferin stressed the commitment of European football's governing body to root out the "disease" of racism.