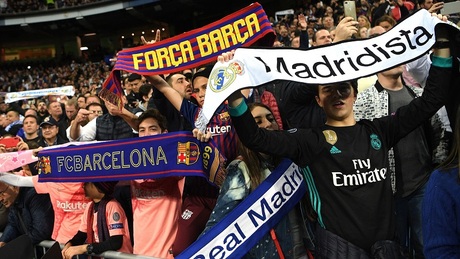 The Spanish football league said Wednesday it had asked the country's football federation to move the next 'El Clasico' between Real Madrid and Barcelona to Madrid following violent protests by separatists in Catalonia.

"We have requested the competitions committee of the Spanish Football Federation to meet and change the location of El Clasico to Madrid because of exceptional circumstances beyond our control," the league (LFP) said in a statement sent to AFP.

According to Spanish media reports Catalan grassroots separatist groups and political parties are preparing a demonstration in Barcelona, the Catalan capital, at 1 pm (1100 GMT) on October 26, the day the La Liga clash is scheduled to take place at Barcelona's Camp Nou stadium.

The football federation (RFEF) confirmed it had received the request and said the two clubs had until Monday to submit their opinions before it makes its decision.

Protests have erupted across Catalonia after Spain's Supreme Court on Monday issued heavy prison sentences of between nine and 13 years to Catalan separatist leaders convicted of sedition over the 2017 referendum and short-lived declaration of independence.

Scores of people have been hurt and dozens arrested in the past two nights of clashes between protesters and police in Barcelona and other Catalan cities.

The convictions on Monday revived tensions in the wealthy northeastern region, split between those loyal to Madrid and those who want it to break away from Spain.

In Barcelona on Tuesday night, police charged hundreds of masked demonstrators who threw projectiles at officers and set garbage bins and cardboard boxes on fire.

One of the most-watched games in club football, 'El Clasico' is often key in deciding the destiny of the La Liga title.