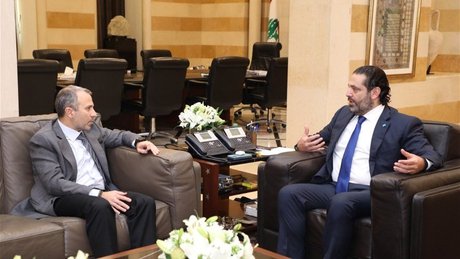 Prime Minister Saad Hariri met Wednesday at the Grand Serail with Foreign Minister Jebran Bassil and discussed with him the latest political and economic developments in the country, the premier’s office said.

Asked about the talks, Bassil told MTV that his ties with Hariri are “always fine.”

LBCI TV meanwhile quoted sources as saying that the meeting tackled “boosting the government’s productivity and expediting the discussion of the state budget based on the agreed reforms.”

Informed sources also denied to LBCI reports claiming that Hariri is mad at Bassil over allegations that the latter “has changed his stance on some reforms.”

The TV network added that the meeting did not tackle the fiery stances that Bassil voiced last week.