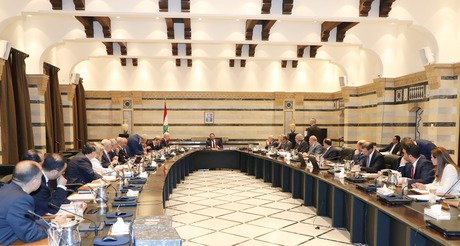 The Cabinet has drawn closer to approving the 2020 draft budget before the October 22 constitutional deadline, following its Wednesday meeting where ministers endorsed several decrees and reforms to cut expenditures and increase the state’s revenues.

"The Cabinet approved the installation of scanners at the border to control smuggling. It also asked all public institutions and utilities not to make any additional investment expenditure, except after the approval of the Council of Ministers, and the transfer of the surplus of these institutions on a monthly basis to the Lebanese treasury," said Jarrah after the meeting.

“We also approved the cancellation and integration of some institutions and public utilities that are unnecessary or can be incorporated in other ministries,” Jarrah announced.

“The Minister of Finance was also tasked with conducting an inventory of the state’s real properties in preparation for a decision on its use. We also passed a law program over 3 years worth 470 billion Lebanese pounds, in order to implement the investment projects approved in Parliament amounting to $3.3 billion dollars,” he stated.

The Ministers of Labor and Parliamentary Affairs were tasked with following up on the pension law, which had already been approved by the Council of Ministers and sent to the Parliament.

Ministers were also asked to make suggestions about a draft World Bank study on reforms. It was also decided to give a 5 percent subsidy to local factories that increase their exports. “If this factory exports products worth $1 million this year, and next year exports goods worth $1.2 million, it gets a 5 percent subsidy on the additional $200 thousand to encourage industrial exports,” stated Jarrah.

Moreover, it was agreed to transfer the McKinsey economic plan to the Economic Commission ministerial committee for study.

Jarrah also said that the state had decided to begin buying hydrocarbons from the public Lebanon Oil Installations, rather than private suppliers. He said the state already does this with diesel, a heavy, low quality fuel oil, and would study doing so for other fuels including gasoline.

Jarrah said the State decided to start buying hydrocarbons from Lebanon Oil Installations (a governmental body related to the Ministry of Energy and Water) rather than private suppliers.

“Tomorrow, we will hold a cabinet meeting at 2:30 in the afternoon, we will finish the agenda and then we will continue to discuss the budget,” he concluded.