French FM Holds Iraq Talks on IS Prisoners in Syria 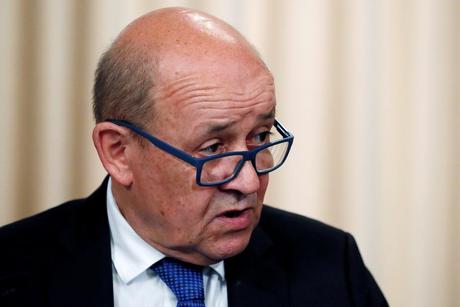 France's top diplomat held talks in Baghdad on Thursday about transferring foreign jihadists including French nationals from northern Syria, where a Turkish offensive is under way, to be tried in Iraq.

European governments fear the Turkish operation will allow some of the 12,000 suspected IS fighters -- including thousands of foreigners -- held by the Kurds in northeastern Syria to escape.

Around 60 French citizens are believed to be among those in custody.

The issue was top of the agenda for French Foreign Minister Jean-Yves Le Drian in his talks with his Iraqi counterpart Mohammed Ali al-Hakim, President Barham Saleh and Prime Minister Adel Abdel Mahdi.

France and other European countries have been discussing in recent months the creation of an international court in Iraq for putting IS members on trial.

Hundreds of foreigners have been sentenced to death or life imprisonment in Iraq for belonging to IS.

Eleven French jihadists handed over to Iraqi authorities early this year by US-backed Kurdish forces in Syria were sentenced to death by a court in Baghdad.