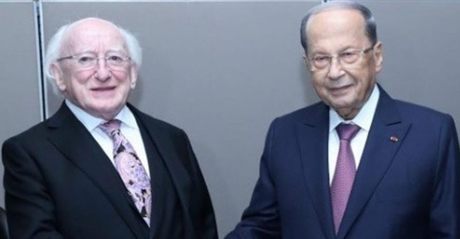 President Michel Aoun on Thursday held a meeting with visiting Irish President at Baabda Palace who said that Ireland is keen on backing the Lebanese government, as discussions highlighted the need for Syrian refugees in Lebanon to return back home.

“Ireland is keen on backing the Lebanese government to stimulate a vibrant economy,” Michael Higgins, the president of Ireland said.

Higgins considered that “one of the most important dimensions in the bilateral relationship between Ireland and Lebanon is the long-term Irish commitment in the United Nations Interim Force in Lebanon,” pointing out that “peacekeeping is a vital part of Irish foreign policy.”

Aoun for his part said he “briefed the President on Lebanon's adherence to UN resolution 1701 and Israel’s withdrawal from territories it still occupies, with its legitimate right to self-defense, as Israel continues to violate this resolution by land, sea and air.”

“Ireland's active participation in the peacekeeping forces in the south contributed to the security and stability of Lebanon for more than 40 years, which created an entire Irish generation sympathetic to Lebanon and its causes,” added Aoun.

The crisis of Syrian refugees in Lebanon was also a key issue, he said: “We focused on the importance of finding political solutions to the Syrian crisis, which contributes to their return to their country. Lebanon can no longer bear more burdens due to the magnitude of this displacement.”

Aoun is standing on a shoebox to look taller than the 150cm tall Irish President.

Wow 162 years of experience there