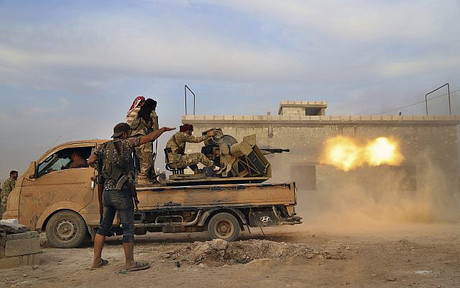 Damascus on Thursday said Syrians are unified against a cross-border Turkish assault, in its first statement since deploying troops in Kurdish-controlled areas to contain Ankara's offensive.

It "affirms the cohesion among Syrians, all Syrians, and their unity, more than ever, under Syria's national flag."

Nine days since Turkey launched an offensive against Kurdish groups in northern Syria, dozens of civilians have been killed and 300,000 have been displaced, according to the Britain-based Syrian Observatory for Human Rights.

Damascus on Sunday clinched a deal with Kurdish forces that saw troops deploying in parts of the Kurdish-run northeast, including the key areas of Manbij and Kobane.

The deployment is the most significant by the army since it began a large-scale pullout from the region in 2012.

It came after the US pulled out from Syria's northern region last week, exposing its Kurdish partners to a Turkish assault.

What the Kurds resent as a US betrayal paved the way for a desperate deal with Damascus, despite long-standing scepticism.

Marginalised for decades, Syria's minority Kurds carved out a de facto autonomous region across some 30 per cent of the nation's territory after the devastating war broke out in 2011.

Damascus, which has previously accused the Kurds of treason over their alliance with Washington, rejects their self-rule and wants central government institutions restored in Kurdish-held areas, especially in the oil-rich east.