No One in Lebanon Can 'Turn the Tables', Says Hizbullah Minister 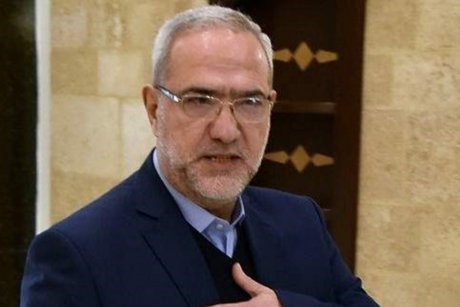 State Minister for Parliament Affairs Mahmoud Qmati, who belongs to Hizbullah, on Thursday stressed that no party in Lebanon can “turn the tables,” following remarks in this regard by Free Patriotic Movement chief MP Jebran Bassil.

“In Lebanon, no one can turn the tables on anyone, because that would be an elimination of the other,” said Qmati as he entered a Cabinet session at the Grand Serail.

The FPM-led Strong Lebanon parliamentary bloc on Tuesday noted that it does not want to “turn the tables” on political rivals in the country but rather on corruption and the financial and economic situation.

Bassil had threatened on Sunday to “turn the tables” on the critics of President Michel Aoun’s tenure.

are Lebanese not ashamed about seeing such thugs dressed in suites?
What has Lebanon become... every politician contradicts the other in merit, thuggery, corruption etc..

all about the money, power, divide and conquer over the people...

One things for sure. Bassil will never be president, when even Syria and Hezbollah are critisizing his statements.