Major Roads across Lebanon Blocked in 2nd Day of Protests 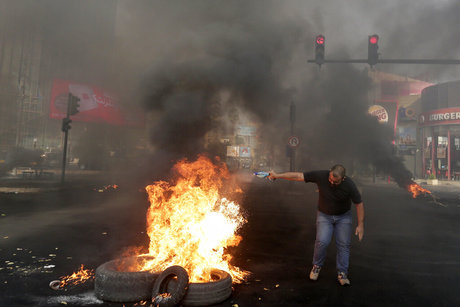 Hundreds of protesters blocked major highways in Lebanon Friday, after thousands angry at proposed tax increases thronged the streets overnight demanding the government's resignation in the largest demonstrations in years.

Public anger has simmered since parliament passed an austerity budget in July to help trim a ballooning deficit and flared on Thursday over plans to tax calls on messaging applications such as WhatsApp, prompting the government to withdraw the deeply unpopular proposal.

The government announced the cancellation of a planned cabinet meeting as protesters gathered for a second day, the state-run National News Agency reported. Prime Minister Saad Hariri is expected to deliver a speech later in the day.

Banks, state institutions, schools and universities were closed as protesters blocked key highways connecting the capital to the rest of the country with burning tires.

Security forces will take necessary measures to protect the safety of civilians and their property, she said on Twitter Friday.

Dozens gathered near government headquarters in central Beirut, screaming anti-government slogans and denouncing dire living conditions in a country with one of the highest debt to GDP ratios in the world.

"We are here today to ask for our rights. The country is corrupt, the garbage is all over the streets and we are fed up with all this," said Loris Obeid, a protester.

"We are here for the future of our kids. There's no future for us, no jobs at all and this is not acceptable any more. We have shut up for a long time and now it is time to talk," she added.

A convoy of motorcycles drove towards the interior ministry, followed by dozens of protesters on foot, who chanted the popular refrain of the Arab Spring protests of 2011: "The people demand the fall of the regime."

Yara, a 23-year-old graduate, said she joined up because the protests were not sectarian.

"Today what matters is that all of the Lebanese people are protesting together."

Protesters also gathered in the southern city of Sidon and in several towns in the east and north. Their numbers were expected to swell though the day.

Demonstrations erupted across the country late on Thursday after the government announced a $0.20 tax on the huge number of calls made on messaging applications.

They are the largest since a 2015 refuse collection crisis sparked widespread anti-government protests.

They come at a time of deep divisions within the government over a raft of issues, including not only the economic reform package, but also the allocation of public sector positions and rapprochement with the resurgent Syrian government.

In central Beirut, rioting continued into the early hours of Friday.

NNA said two foreign workers choked to death early Friday after they were trapped in a building set alight by rioters.

Other reports said the two men were Syrian.

In a sign of the scale of the popular anger, demonstrations were reported Thursday in neighborhoods dominated by Hizbullah, a party not used to opposition in its own bastions.

Protesters also burned pictures of Hariri in the northern city of Tripoli, where he is influential, and others protested near Beirut against President Michel Aoun.

Sami Nader, director of the Levant Institute for Strategic Affairs think-tank, said the protests were "totally spontaneous" and appeared to be against the entire political class.

"The protests are a result of a piling up of grievances, resulting mainly from government mismanagement," he said.

"I want the streets to be lit. I don't want to hear any more generators," Dima Abu Hassan, 42, said. "Start there -- at least some infrastructure."

The government has also come under heavy criticism over its response to forest fires.

Growth in Lebanon has plummeted in the face of repeated political deadlock in recent years, compounded by the impact of eight years of war in neighboring Syria.

"Most high-frequency indicators point towards a continuation of weak growth in 2019," the International Monetary Fund said Thursday.

Burning tires is criminal! It's okay to protest and block roads but not by spreading cancer.

Is there anything you are eating does not have cancer?

Nawaf Musawi:"it’s an honor for the Lebanese that President Michel Aoun became president by way of the rifle of the resistance"
And it looks like he's going out the same way.

Its so refreshing to see protesters who do not burn or pillage to make their points heard. By their acts some of the protesters are the very people most Lebanese are against! Education is still our only long term salvation....in the interim look at this specimen of a human trying to burn tires that he breathes the very same carcinogen from.....