Hizbullah Official: Presidency, Govt. and Hizbullah Not to Blame for Current Crisis 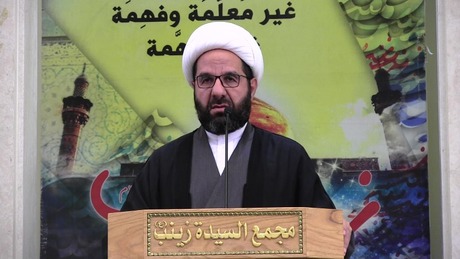 A senior Hizbullah official on Friday announced that the incumbent presidency and government as well as Hizbullah cannot be blamed for the country’s current economic crisis, as massive and unprecedented protests engulfed the entire country.

“The spontaneous popular protests that Lebanon is witnessing reflect the magnitude of the living conditions crisis that the people are suffering,” Sheikh Ali Daamoush, the deputy head of Hizbullah’s executive council, said.

“We have continuously warned that the wrong economic policies and the imposition of more taxes and burdens on citizens would lead to a popular explosion,” Daamoush added during a Friday prayer sermon.

“People are expressing their plight and pain and their scream must be heeded, but the protests must remain peaceful and public and private properties should not be attacked,” Daamoush urged.

He added: “The crisis is an accumulated crisis that the incumbent presidency and government are not responsible for but rather all the previous presidencies and the successive governments.”

Daamoush also said that Hizbullah must not be held responsible, noting that his party has “rejected all forms of taxes on the poor and the middle class and raised the banner of combating corruption.”

“It is unacceptable to hold it responsible for measures that it has rejected and tried to prevent,” the Hizbullah official went on to say.

Stop trying to blame everyone else you hypocrite. You are the problem, along with the rest of the people in government. Pointing fingers at others to make yourself look good is just sad.

Stop trying to blame everyone else you hypocrite. You are the problem, along with the rest of the people in government. Pointing fingers at others to make yourself look good is just sad.

this guy is still still talking - it is not us - all we want is the resistance army and people equation-the golden equation- - the hell with you and your equation - just leave to iran and leave us the hell alone.

No body in the present or past government is to blame. the blame is lies on the sheep that keep voting for the same people. Watching the demos is a good start but when you talk to the demonstrators the red line is drawn if you approach their fearless leaders. Remember what happened when they started mentionning what Saniora did and how quickly a red line was drawn, the same with Berri and Aouan, Bassil and so on. To solve the problem no red lines put them all ( present and past ) on trail by the world court and not by Lebanon's court system. I mean when Bassil cam to power he was poor and look at him now, the same goes for Berri and the lot of them. they are all guilty and hopefully the sheep have finally woken up and this will not turn secterian.

Hizbullah Official: Presidency, Govt. and Hizbullah Not to Blame for Current Crisis

of course not! It is a zionist/saudi/american conspiracy.