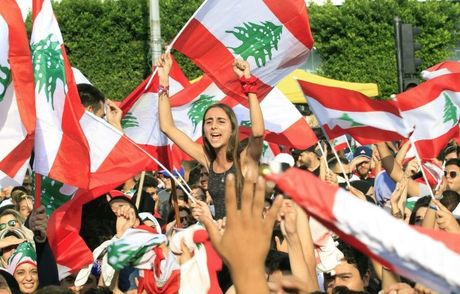 Surrounded by chanting protesters, Lebanese mother-of-two Nada Saad cries her despair over the political leadership's mismanagement of her country.

"They're laughing at us," she shouts at a protest in central Beirut.

"Wherever we work, there's no social security. Our children graduate and can't find a job," says Saad, a 51-year-old who says she ekes out a living as a manicurist.

"We want a metro, we want buses, we want a train," she rails, in a country with little public transport.

Saad is among tens of thousands who protested all over the country on Saturday, in a third such day of unrest.

All around her, men, women and even children have come to protest near the seat of the government -- many for the first time, and several to demand a better future for their children.

Families mill around the edges of the crowd, waving national flags -- the country's green symbol of a cedar tree on a background of red and white stripes.

But closer to the barriers manned by security forces, the chants are louder and more determined.

"The people want the fall of the regime," they cry in unison, echoing a chant popular during the uprisings that swept through the Arab world in 2011.

While the protests are fueled by popular anger, so far their goals are somewhat undefined.

No specific demands have been published and most people simply want to vent their anger at what they feel is a broken system.

Lebanon has been gripped by endless political deadlocks in recent years, compounded by eight years of civil war in neighboring Syria.

In a multi-confessional country where the same families have been in power for decades, Lebanese from all religious confessions and walks of life have come together in recent days.

They have had enough of endless electricity cuts, what they say is crippling nepotism, and -- in Beirut -- the looming specter of garbage dumps brimming almost full.

They say they are tired of struggling to make ends meet in an ailing economy, and a lack of job opportunities that sends many graduates fleeing abroad.

Lebanon's public debt stands at more than $86 billion, according to the finance ministry -- one of the highest in the world.

The World Bank says more than a quarter of the population lives below the poverty line.

In the middle of the crowd, Saad says she only braved the possibility of closed roads to demonstrate once she was convinced her fellow Lebanese were united.

"We have nothing," she tells AFP, wearing a black shirt with white spots and aviator sunglasses.

"Nothing but debts," says the mother of two boys, the oldest 25 years old and unemployed.

Not far off, Amal Mokdad says she is fed up with paying thousands of dollars a year on her two sons' private education.

"If I don't put them in those schools, they won't find a job," she says of her boys aged seven and 11.

Beside her, Lamya Berro, 38, is taking part in her first ever protest surrounded by her three daughters, after being moved by the plight of young demonstrators in her neighborhood.

"We've seen how much people are suffering," she says.

"We don't care what the politicians have responded" to the protests, she says, a day after Prime Minister Saad Hariri gave cabinet members three days to rally around key reforms.

"We've tried them all -- even the previous generations -- and we've decided we can't go on like this," she says.

"The people now want to decide the country's future."

As the protests swell in the evening, red flyers appear among the crowd.

"Leave," they read, next to the images of Hariri, President Michel Aoun and Parliament Speaker Nabih Berri.

Fadi Karam, a 40-year-old who says he works in construction, claims the political elite share the blame equally.

"All the leaders, all the corrupt people in the state, are responsible," he says.

"People are tired. They have no money," he says a day after dozens were arrested following trash fires and shattered store fronts in central Beirut.

Karem Monzer, a 23-year-old filmmaking graduate still trying to pay off his debts, says he does not agree with vandalism.

"But we can't blame poor people who are hungry," he says.

"And if a people are hungry, they will eat their leaders."