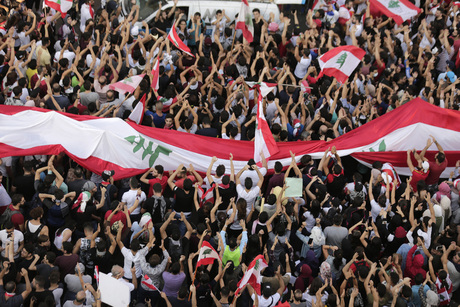 Media reports said that Hariri is set to address the nation after the meeting.

The National News Agency said the entire roads leading to the Presidential Palace were blocked by security forces amid tight security measures.

Civil Defense teams were also called in the area in case of emergency, it added.

Lebanese protesters were expected to return to the streets for a fifth day Monday, with Hariri holding a cabinet meeting to try to calm the unprecedented demonstrations.

Banks, universities and schools closed their doors Monday, with Hariri expected to offer reforms in a bid to stem the anger.

At the nerve centre of the demonstrations near the country's houses of government in central Beirut, volunteers were once again collecting rubbish from the streets, many wearing face masks and plastic gloves.

The protests have grown steadily since public anger first spilled onto the streets Thursday evening in response to a proposed tax on calls via WhatsApp and other messaging services.

While the government quickly dropped that plan, the leaderless protests morphed into demands for a sweeping overhaul of the political system, with grievances ranging from austerity measures to poor infrastructure.

Hariri had given his coalition partners three days to support reforms he said were crucial to get the economy back on track.

On Sunday evening a cabinet official said that the parties had agreed.

The cabinet will hold a meeting chaired by President Michel Aoun at 10:30 am (0730 GMT) to discuss the reforms.

Demonstrators said Hariri's proposals would not be enough, with demands for the entire political class to resign.

More than a quarter of Lebanon's population lives below the poverty line, the World Bank says, while the political class has remained relatively unchanged since the end of a devastating 15-year civil war in 1990.