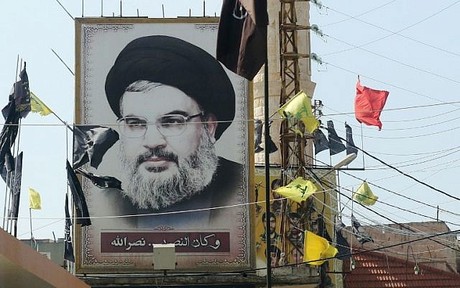 On live TV and in protest sites, citizens accused the party of providing political cover for a corrupt government that they say has robbed people of their livelihoods.

This shattered the myth of absolute acquiesence among Hizbullah's popular base, baffling even those who hail from the movement's strongholds.

"No one ever expected that in any of these areas in south Lebanon we would hear a single word against Nasrallah," or AMAL Movement leader Nabih Berri, said Sara, a 32-year-old activist who participated in protests in the southern city of Nabatiyeh.

"It's unbelievable," the activist added, asking to use a pseudonym due to security concerns.

The popular Iran-backed movement is a major political player that took 13 seats in the country's May 2018 parliamentary elections and secured three cabinet posts.

It helped its Christian ally Michel Aoun assume the presidency in 2016 and has since backed his government despite popular dissatisfaction that peaked last week following protests over taxes, corruption and dire economic conditions.

South Lebanon -- a bastion of the powerful Shiite movement since the group liberated the region from Israeli occupation in 2000 -- was not spared.

Protests have been reported in the cities of Nabatiyeh, Bint Jbeil, and Tyre, where Hizbullah and its political affiliate the AMAL Movement hold sway.

With the exception of Tyre, they were not as big as other parts of the country.

But "the novelty here is that some of these protesters are party loyalists," said Sara.

"They support Hizbullah, but they are suffocating."

Among his supporters, Nasrallah is revered as an icon, with his pictures inundating highways, shops and homes.

In the past, his followers have mobilized against anyone who tried to criticize him, often ostracizing opponents as supporters of rival Israel.

But anti-government protests that started in Beirut on October 17 and quickly spread across the country left no politician unscathed, not even the Hizbullah leader.

"All of them means all of them, Nasrallah is one of them," protesters chanted in Beirut.

Criticism of Nasrallah even aired on the Hizbullah-run Al-Manar TV, in a scene that was previously unfathomable for watchers of the movement's media arm.

In a live interview from central Beirut, one protester urged Nasrallah to "look after his people in Lebanon" instead of focusing on regional enterprises like Syria, where he has deployed fighters to defend President Bashar al-Assad's regime.

Nasrallah acknowledged the mounting criticism against him in a speech on Saturday: "Curse me, I don't mind."

Speaking on the protesters demands, he warned against calling for the resignation of the government -- saying it could take a long time to form a new one and solve the crisis.

"The messages being addressed to Nasrallah by his own supporters in Nabatiyeh is that the resistance is not just about fighting Israel or terrorism," he said.

"It should also be about supporting people's livelihoods."

Other party heads have come in for even greater criticism.

Prime Minister Saad Hariri, Foreign Minster Jebran Bassil and Speaker Nabih Berri have been the targets of strong insults and slurs by demonstrators, even in areas where they are popular.

But the relatively toned-down criticism of Nasrallah has broken taboos, said Gharbeel.

"The barrier of fear has been broken, " he said.

"It shows that people are not blindly following their political or sectarian leaders anymore."

Lokman Slim, an independent political activist and an outspoken critic of Hizbullah, said that resentment among Lebanon's Shiite community "is not born out of a single event or a single moment."

"Frustration has been fermenting over the past few years over an economic crisis hampering not just the Lebanese state but also Hizbullah's statelet."

Hizbullah has filled in for the weak central government in areas where it has influence, creating social welfare institutions and provided an array of public services, including education and health services.

But the group has come under financial strain due to tightening U.S. sanctions since President Donald Trump assumed office, forcing Nasrallah to appeal to his popular base for donations earlier this year.

"The Shiites have nothing to lose anymore," said Slim.

"This is why they are out on the streets."

Ebola’s cash reserves are so low that they cannot afford to buy out all of their supporters anymore. They feel left out by the party (or should i say a militia).
Let’a hope that the people... from every corner of the country, comes to its senses, and that all our rulers step down... one by one... or all at once!

The first place to go when cleaning out the corruption that is the Lebanese governing class is to Hezbollah. It has to be made to play by the same rules as everyone else. The cut off of assistance from Iran, due to US Sanctions on Iran will be long term. The only source of money to service the needs of the Shiite or any other group in Lebanon is the Lebanese Government. It is no longer a cow to be milked by the political class. The rule of law, an honest and independent judiciary is the first step back from the abyss for Lebanon.

The Lebanese political class has theft in their genes and DNA. Hezbollah, however is a catalyst to activate that gene. The 1989 Taif Accord was supposed to cover all militia so that they would disarm in favor of the LAF. Hezbollah excused itself because Syria allowed it then.
Since 1989, Hezbollah has expanded its exemption. They import goods at the Port of Beirut without paying customs duties under the guise of "Resistance Goods" such as cars and home appliances; they do not pay taxes; they have their own telecommunications network; and, their high ranking party members live like kings while their constituents in the Shiite Community are living in poverty.

Naharnet.com ought to hire someone who can read and write so it can generate its own coverage of this event. I stopped reading the AFP story. I'll bet it didn't mention Article 24 of the Constitution which gives half of the legislature to Christians although Shias by themselves are more than half the population and yet Hezbullah never tries to change the law. Lebanon's ruling elite is ridiculous, but that's better than France, which is pathetic. As Trump said, France still thinks it's Napoleon Bonaparte.

Wow, it took you along time, but you finally got there. No matter what the subject you always manage to bring Israel into the fray, and as usual blame them for all Lebanon's problems.
It's time for you to wake up and realise that if your leaders in the 1980's had stood up to the Syrian occupiers and signed the peace treaty with Israel, things in Lebanon would be completely different. Firstly,there would have been no Hizballah having their state within a state. Secondly co-operation would have brought about an end to the electricity shortages that have plagued the country for many years. Thirdly Lebanon today would be beginning to enjoy the income from the hugh natural gasfields off its maritime borders.
So,dear Mystic, WAKE UP.