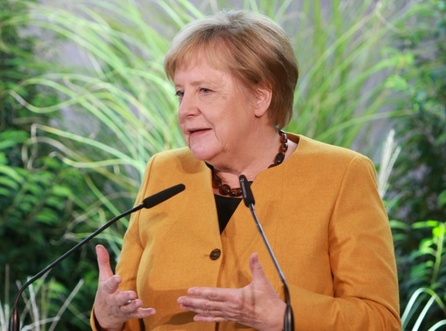 A Berlin court on Thursday threw out a case brought by three farmers against Chancellor Angela Merkel's government over its failure to meet climate protection targets, hyped by campaigners as the first such legal challenge in Germany.

After the government admitted it would fail to meet its own and EU greenhouse gas reduction goals for 2020, the would-be plaintiffs -- farmers backed by environmental group Greenpeace -- had tried to sue to force corrective action.

They said the government was breaking the law and infringing on their fundamental rights by damaging their crops.

A crowd of around 30 Greenpeace activists rallied outside the courthouse as the hearing got underway in the morning.

But judges found there was "no visible legal basis that would create an obligation for the federal government to act" if they heard the case, the Berlin administrative court said in a statement.

The original cabinet decisions to set the climate targets were not legally binding, they said, while EU commitments could be met in other ways like participating in the bloc-wide emissions trading scheme.

Neither did damage from heat, droughts and torrential rains to the farmers' crops and livestock infringe on their property rights guaranteed under Germany's constitution, the judges found.

Lawmakers and government "have scope to evaluate, judge and make policy concerning obligations to protect fundamental rights that is subject only to limited control by the courts," they said, appearing to agree with the government's arguments.

"Plaintiffs did not demonstrate that the federal government's measures were completely inappropriate and inadequate" the court added.

The farmers, a  fruit-grower and two livestock farmers, cited cattle stressed by heatwaves and huge crop losses due to extreme weather swings as grounds for action.

"We feel that our livelihoods are threatened. We are afraid that if we don't do something, the fruit farm won't survive," co-plaintiff Franziska Blohm, whose family manages an organic operation near Hamburg, told AFP ahead of the hearing.

The aim of the exercise is not to obtain "damages or anything similar," she stressed.

Merkel's government last year admitted it would fall short of its climate target of slashing greenhouse gas emissions in Germany by 40 percent by 2020 compared to 1990 levels.

Rather, it expected to achieve only 32 percent in reductions compared to 1990.

With climate shooting up the political agenda after two blistering summers and a wave of Fridays for Future student strikes, Berlin has since rolled out a new environmental protection package, with Merkel pledging that Germany should be climate neutral by 2050.

But the plan worth at least 100 billion euros ($111 billion) by 2030 has been immediately slammed as unambitious by scientists and environmentalists alike.

Another of the plaintiffs, Heiner Leutke Schwienhorst, has run his dairy farm at Vetschau around 100 kilometers (62 miles) south of Berlin for three decades.

He said it was time to make the government take "political accountability".

Last year's record drought, unseen in Germany since 1911, was "simply frightening," he said.

Up to half of his livestock feed crop was lost, forcing him to buy 400 bales of hay.

Last year's dry spell stretched from late spring well into winter, even halting water traffic across the country, including on the Rhine river, one of Europe's busiest commercial arteries.

The Blohm family said half of its crops were lost because of the unusually hot summer last year.

It led to "burns on trees, on apples, on leaves," said Claus Blohm.

"Not only that, the last year was decisive in how much fruit the trees could bear this year. And they were under so much stress that we had a crop failure of 50 percent. It just can't go on like this."