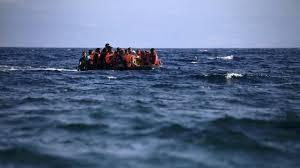 Cyprus police said Monday they towed to shore 131 migrants, almost all from Syria, after they were sighted on an overcrowded boat off the Mediterranean island’s northwest tip.

The boat with 129 Syrians, one Lebanese and an Egyptian on board was located five nautical miles off the coast by a patrol vessel and tugged to Latchi harbor.

Police believe the boat set off from Turkey, a route used by people smugglers in the past.

According to the official Cyprus News Agency, those on board told police they had paid smugglers $2,000 each to bring them to the island.

Once they neared the island, the captain had abandoned the vessel on a speed boat.

Two Syrian men, aged 33 and 43, seen on a speed boat in the same waters as the migrant vessel were arrested for questioning, police said.

The migrants, including five women and eight children, were to be transferred to a reception center outside the capital Nicosia.

In August, Cyprus requested fellow EU member states to take in 5,000 of its migrants to alleviate the "disproportionate pressures" it faced.

The small member state has yet to receive a response.

According to available data, the number of migrants arriving in Cyprus and applying for asylum between January and June 2019 reached nearly 7,000.

The backlog of applications awaiting examination has increased to 15,000.

But Cyprus, located 100 miles (160 kilometers) from the Syrian coast, has not seen the massive inflow of migrants experienced by Turkey and Greece.