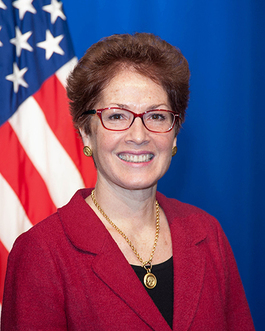 The former U.S. ambassador to Kiev told investigators she felt threatened by Donald Trump's words in his call to Ukraine's leader, in the first transcripts released Monday in the impeachment investigation against the president.

As Democrats unveil a new, public phase of the probe, they released the full transcript of the deposition of former ambassador Marie Yovanovitch, who testified last month that she was ousted over "false claims" spread by questionable actors allied to Trump.

The Democratic-led impeachment probe is examining how Trump pressured Ukraine to investigate his Democratic rival Joe Biden, including by withholding nearly $400 million in military aid that had been approved by Congress for the country.

Yovanovitch, according to the deposition released Monday, was alarmed by the deepening involvement of Trump's personal lawyer Rudy Giuliani in Ukrainian affairs, and in particular his efforts to get Kiev to investigate Biden.

She said she was "shocked" when she read the publicized memorandum of Trump's July 25 call with Ukrainian President Volodymyr Zelensky in which Trump said the ambassador was "going to go through some things."

"I was very concerned. I still am," Yovanovitch said about Trump's remarks.

"Did you feel threatened?" an investigator asks Yovanovitch.

"Yes," she replies in the transcript.

The release is the first in what House Intelligence Committee chairman Adam Schiff said would be multiple releases from depositions already conducted.

Schiff also released the testimony of Michael McKinley, a former senior adviser to Secretary of State Mike Pompeo. McKinley said he resigned this year after concluding that the department was not defending its top diplomats from White House pressure.

Yovanovitch's and McKinley's testimony "demonstrates the contamination of U.S. foreign policy by an irregular back channel that sought to advance the President's personal and political interests, and the serious concerns that this activity elicited across our government," Schiff and chairs of two other panels leading the investigation said in a statement.