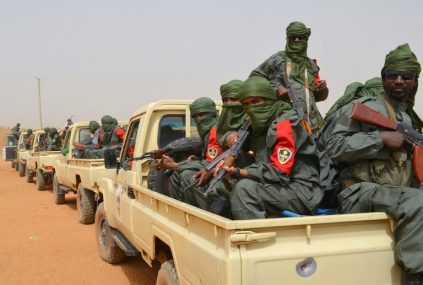 Following are the main armed groups in Mali, where authorities are battling a jihadist insurgency and conflict rages between ethnic communities.

The GSIM has claimed responsibility for the biggest attacks in the Sahel since its official launch in 2017. It was placed on a US blacklist of terrorist organisations in September 2018.

Comprising several jihadist groups linked to al-Qaeda in the Islamic Maghreb (AQIM), the GSIM alliance is led by a Tuareg Malian, Iyad Ag Ghaly, an Islamist with a 29-year record of revolt.

GSIM's components include Ag Ghaly's Ansar Dine, a group that in 2012 seized control over northern Mali before being expelled by a French-led international force.

Others are the so-called Katiba Macina, led by a radical Fulani preacher, Amadou Koufa, and the self-described Sahara Emirate of one-eyed Algerian jihadist Mokhtar Belmokhtar, a former AQIM leader.

A local branch of the self-described Islamic State group, the ISGS is mainly active in the northeastern Malian region of Menaka and across the border in Niger.

The group leapt to world prominence after an ambush near the village of Tongo Tongo in Niger in 2017 that claimed the lives of four US special forces and four Nigerien troops.

Its leader is Adnan Abu Walid al-Sahraoui, whose nom de guerre derives from his birthplace in the Western Sahara.

Al-Sahraoui's history of militancy dates back to fighting in the Polisario Front, which aims to end Moroccan control over the Western Sahara.

He became a leader of the Movement for Oneness and Jihad in West Africa (MUJAO), which then merged with a Belmokhtar group, forming Al-Mourabitoun.

In 2015, he broke with Belmokhtar to declare allegiance to the Islamic State group.

So-called self-defence groups, ostensibly set up to protect beleaguered communities, have proliferated in the ethnic mosaic of central Mali, with bloody consequences.

Their origins date back to 2015 with the emergence of an armed group inspired by Amadou Koufa, a radical preacher and veteran jihadist.

The group recruited mainly among the Fulani, an ethnic group consisting mainly of semi-nomadic herders.

Attacks on the Bambara and Dogon communities, who are mostly sedentary farmers and hunters, led to these groups setting up "self-defence" organisations.

In apparent tit-for-tat raids, about 160 Fulani were killed last March in Ogossagou, near the border with Burkina Faso, while in June some 75 Dogons were killed in Sobane Da, Gangafani and Yoro.

A dozen armed groups signed agreements to end hostilities in the Mopti and Segou regions in early August.