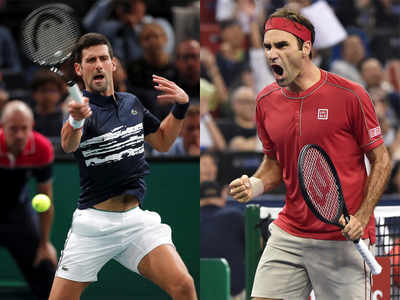 Spectators will be hoping for a mini repeat of this year's epic Wimbledon final between Novak Djokovic and Roger Federer after the two tennis legends were drawn in the same group for next week's climax to the season, the ATP Finals.

Their group clash in London will only be the best of three sets -- Austria's two-time French Open finalist Dominic Thiem and Italian Matteo Berrettini make up the quartet.

World number one Rafael Nadal is in a group with this year's US Open finalist Daniil Medvedev, Stefanos Tsitsipas of Greece and Germany's Alexander Zverev.

Nadal declared himself fit for the finals on Tuesday after he pulled out of last week's Paris Masters semi-finals -- a scan revealed a "slight strain to the left abdominal".

Nadal had still replaced Djokovic -- who won the Paris Masters -- as world number one but the Serbian can reclaim it.

Djokovic will take top spot if he wins two group-stage matches and reaches the final and if the 33-year-old Spaniard -- who has yet to win the finals -- does not play or fails to win a round-robin match.

Djokovic will also finish the year as number one if he wins the tournament and Nadal does not reach the semi-finals.