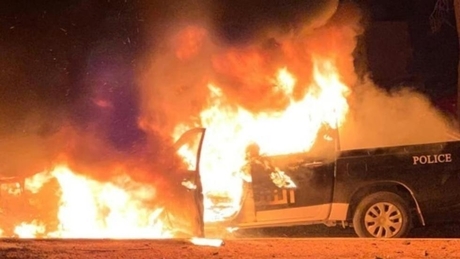 Two Libyan policemen were killed in an air strike on a police station in the suburbs of Tripoli late Tuesday, the UN-recognised Government of National Accord said.

Its interior ministry blamed the strike on the forces of east Libyan strongman Khalifa Haftar, who launched an offensive against the capital in April.

Hundreds of people -- both combatants and civilians -- have been killed in the fighting and tens of thousands have fled.

"The air force of war criminal Haftar targeted the headquarters of the rapid intervention force... in Ain Zara on Tuesday, killing two security agents," the ministry said in a statement.

It added that four other people were wounded and posted pictures on its Facebook page of police cars in flames.