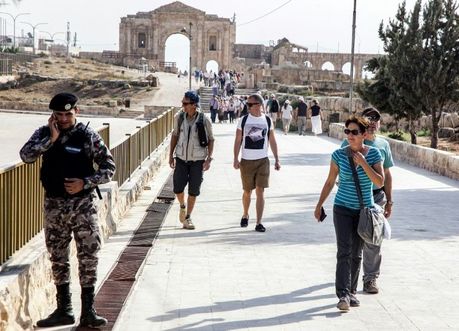 Eight people, including four tourists, were wounded in a knife attack on Wednesday at the famed archeological site of Jerash in northern Jordan, a security spokesman told AFP.

Four tourists -- three Mexicans and a Swiss woman -- were wounded, along with a Jordanian tour guide and a security officer who tried to stop the assailant, public security directorate spokesman Amer Sartawi said.

The attack took place around noon (1000 GMT) at the Roman ruins of Jerash, a popular attraction 50 kilometers (30 miles) from the capital Amman.

The health ministry confirmed that eight people had been wounded, with Sartawi saying earlier that they had "been transported to hospital for treatment."

He said the assailant had been arrested but did not specify his nationality, noting that the motive was as yet unknown.

Jordanian tour guide Zouheir Zreiqat was at the scene and told AFP that the attack happened "just before midday when around 100 foreign tourists" were at the site.

"A bearded man in his twenties wearing black and brandishing a knife started to stab tourists," according to Zreiqat.

He said others started to shout for help and he, along with three other tour guides and three tourists managed to stop the assailant.

"We chased him until we could grab him and get him on the ground," Zreiqat said.

"We took the knife from him. He stayed silent, without saying a word until the police arrived and arrested him."

It was not the first time tourist sites have been targeted by attacks in Jordan.

In December 2016, in Karak, home to one of the region's biggest Crusader castles, 10 people were killed in an attack that also left 30 wounded.

Seven police officers, two Jordanian civilians and a Canadian tourist were killed in the attack.

The attack was claimed by the Islamic State group (IS) and sparked concern over its impact on tourism, a mainstay of the Jordanian economy.

Ten people were convicted of carrying out the attack, with two sentenced to death.

Several violent incidents struck the country the same year, including a suicide attack in June claimed by IS that killed seven Jordanian border guards near the frontier with Syria.

Amman has played a significant role in the United States-led coalition fight against IS in Syria and Iraq, both neighboring Jordan.

Lacking in natural resources, the country of nearly 10 million depends on tourism and the kingdom has been working to pull the key sector out of a crisis caused by regional unrest in recent years.

Jordan's economy as a whole was hit hard by the combined impact of the international financial crisis, the Arab Spring uprisings that convulsed the Middle East in 2011 and the conflict in Syria.

Tourism accounts for 10 to 12 percent of gross domestic product and the government aims to double this by 2022, former tourism minister Lina Annab told AFP in an interview last year.

The country boasts 21,000 archaeological and historical sites that span millennia, according to the tourism board.

They include the Roman ruins of Jerash, the ancient city of Petra, the Dead Sea and Wadi al-Kharrar, or Bethany Beyond the Jordan, where some believe Jesus was baptized.

Jordan welcomed seven million tourists in 2010, but arrivals plunged to around three million in each of the following two years, tourism board head Abed Al Razzaq Arabiyat said in April.

Numbers have rebounded as spillover from the war in neighboring Syria has abated, officials have said, with the government working to bring annual tourist arrivals back up to 7 million by 2020.