Sudan to Form New Parliament after Peace Deal with Rebels 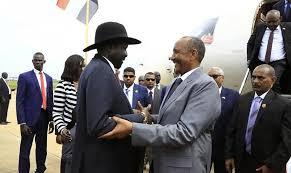 Sudan's protest movement Thursday agreed to form the country's new parliament only after a peace deal is reached with rebel groups for ending long-running conflicts in three border regions.

The 300-member parliament was to be formed within three months of a power-sharing deal that was signed on August 17 between protest leaders and the generals who had seized power after the April overthrow of longtime president Omar al-Bashir.

Since the signing of the so called "Constitutional Declaration", the transitional government, led by Prime Minister Abdalla Hamdok, has engaged in talks with three rebel groups to reach a peace deal to end the wars in Darfur, Blue Nile and South Kordofan.

Hundreds of thousands have been killed and millions displaced in the rebellions by ethnic minority groups in the three conflict zones that met with an iron fist from Bashir's ousted regime.

As the talks progressed in the South Sudanese capital of Juba, the three rebel groups insisted that the new parliament be formed only after peace deals have been signed.

The protest movement Forces of Freedom and Change had recently said it was keen to stick to the November 17 date to compose the assembly.

But on Thursday a top rebel leader and a leader from the protest movement confirmed that parliament will now be formed after a peace agreement has been reached.

"The two parties have agreed not to form a parliament until a peace agreement is reached," Yasir Arman, deputy leader of rebel Sudan People's Liberation Movement-North (SPLM-N) that is engaged in talks with Khartoum, said in a statement.

A senior leader from the protest movement, Yousef Zain, confirmed to AFP that "we have postponed appointing of members of parliament".

The rebel groups and protest movement have however agreed to go ahead with appointing new civilian governors for the 18 Sudanese provinces, the two leaders said.

Hamdok's government has made reaching a peace deal to end conflict in the three war zones a priority.

Bashir himself is wanted by the Hague-based International Criminal Court for genocide, war crimes and crimes against humanity for his alleged role in the war in Darfur. He denies the charges.