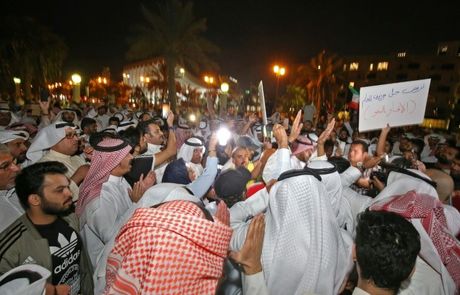 A demonstration held outside the Kuwaiti parliament over alleged rampant corruption was reminiscent of past crises that have marred political life in the oil-rich Gulf state.

The gathering on Wednesday night by hundreds of protesters, the first of its kind in the emirate for several months, comes at a time of mass demonstrations against graft in Lebanon and Iraq.

Kuwait is the only member of the six-nation Gulf Cooperation Council (GCC) to have witnessed such anti-government protests.

Here is a look at the causes and possible impact.

- Why are Kuwaitis angry? -

At the opening ceremony of the newly-elected parliament last week, pro-government speaker Marzouk al-Ghanem lashed out at what he said was gross exaggeration of the extent of corruption in Kuwait.

He said there were attempts to show Kuwait as if it were "the capital of the corruption world and that all Kuwaitis are involved in corruption."

"Citizens feel that corruption is widespread everywhere. We are the world's richest country but still have no good roads, (public) education and health services have deteriorated," Dashti told AFP.

Kuwait ranks 78th on the 2018 Corruption Perceptions Index compiled by Transparency International -- the worst performance of any of the oil-rich Gulf states.

The government-appointed Anti-Corruption Authority said last year it received 196 complaints regarding corruption cases but referred only 34 of them for investigation.

Given the current mood across the region, commentators are watching to see if the Kuwait demonstrations escalate, and if so whether the government will be vulnerable.

At Wednesday's protest, unlike previous demonstrations, no political organisations were invited and no speeches made, making its impact difficult to assess.

Those rallies, led by opposition groups and lawmakers, were also focused on combating corruption and pressing for political and constitutional reforms.

The protests forced then prime minister Sheikh Nasser Mohammad al-Ahmad Al-Sabah, a leading member of the ruling family, to step down.

The emir issued a decree to dissolve parliament and call for early polls.

If the latests protests continue, "the government of Prime Minister Sheikh Jaber Mubarak Al-Sabah will resign and snap polls will be held," said Dashti.

Kuwaitis are allowed to hold peaceful protests as part of their constitutional rights, on condition they obtain a permit from the authorities.

Unlike its Gulf neighbors, Kuwait has a vibrant political life and an elected parliament. It became the first Gulf state to have a constitution and elected chamber in 1962.

The 50-seat parliament also has powers to hold ministers to account, even though senior members of the ruling family hold all top cabinet posts.

The system has led to repeated standoffs between lawmakers and the ruling family in Kuwait, whose citizens make up about 30 percent of the 4.7-million population.