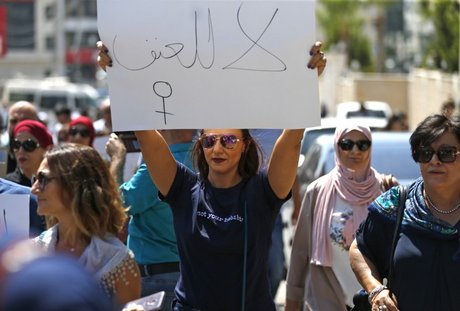 Marching along with hundreds of other women in Lebanon's capital, 41-year-old Sahar says she had twice the reasons to join in the nation's mass anti-system protests than any man.

"As women, we're doubly oppressed," she said passionately, while around her hundreds waved Lebanese flags and chanted against the patriarchy.

Women have been at the forefront of Lebanon's mass street movement since October 17 demanding an overhaul of a political system seen as incompetent and corrupt.

Like their male counterparts, they have denounced their inability to alleviate a raft of woes from a deteriorating economy to unclean water and endless power cuts.

But in a country viewed as one of the most liberal in the region, they are also crying out against discriminatory laws and religious courts governing their lives.

"On top of everything we suffer as Lebanese people, there's a whole bunch of laws that are unfair for women," said Sahar, bouncing on her toes in a green T-shirt and jeans.

In a country where 37 women have died from domestic violence since the start of 2018, female protesters are demanding better prevention and application of a 2014 law to punish battery.

Instead of what they see as antiquated religious courts, they want a national law for all Lebanese -- whatever their sect -- to grant civil marriage, and rule on issues of divorce and child custody.

They ask for the amendment of a century-old law governing citizenship that does not allow Lebanese women to pass down their nationality to their children.

During a women's march on Sunday, protesters held up a long banner inscribed in red paint with the words: "Our revolution is feminist".

"I can't get my mother's nationality, but I can defend her revolution," read another sign, referring to the 1925 law that deprives children of Lebanese women from their rights as citizens.

Zoya Jureidini Rouhana, head of a the Kafa non-governmental organisation, explained the challenges ahead in the tiny multi-confessional country.

"There is no single law for personal status but different legislation for each court from 15 different religious sects in Lebanon," she said.

Among the most contentious issues is child custody, with religious authorities for each community applying a different limit to a divorced mother's custody.

In the Catholic church, children in theory must be handed over after the end to breastfeeding or at around two years of age, but a court decides in the interest of a child.

For Greek Orthodox Christians, a mother loses permanent care of the child when they reach 14 years old for boys and 15 for girls.

After widespread pushback, Sunni Muslim divorcees have been granted full custody until their children turn 12.

But in the Shiite community, children are whisked away to live with their fathers when they turn two for boys and seven for girls.

Similar differences also apply on matters of inheritance, as well as in setting the minimum age to wed, with no national law to ban unions under the age of 18.

Rim, a 24-year-old student, said she has been taking to the streets since October 17 -- for cleaner water, fewer power cuts and an end to perceived state graft.

"As a young Lebanese woman, I demand a secular system and for religious courts to be abolished," she said.

Women have been at the forefront of the protests since they started last month, sparked by a proposed tax on phone calls via free applications like WhatsApp before blowing up into general rage against the system.

In the movement's first few days, a woman who kicked an armed ministerial bodyguard in the groin became a symbol of the growing protests.

In recent days, female high school and university students have eagerly spoken to local television stations to ask for politicians to stop wasting their future.

Women have taken to Beirut's main square after dark holding candles and banging pots and pans, in a clamouring racket that echoed around the capital's homes.

Debate around women's rights has gained momentum in recent years, but activists says much remains to be done.

In 2014, parliament passed a law to punish domestic violence, but rights advocates have demanded it be reformed to accelerate trials and increase sentences.

Among the protesters, Roba, 33, a lawyer, said women's rights were crucial for radical change.

Lebanese Woman have shown they can lead and make change and so we all stand and salute their cause and bravery!
It makes us all proud to see them take on the challenge of freeing Lebanon from Syrian dictatorship.

"No to violence". The Christian elite has had its chance since 1925.