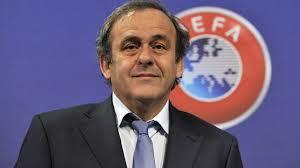 Former UEFA president Michel Platini is taking action to obtain substantial amounts of back pay as well as a bonus and legal fees, he told AFP on Friday.

According to sources close to Platini, whose four-year suspension from football ended in October, the former France international is seeking to recoup around 7.2 million euros ($7.9 million), including 5.5 million euros in back pay.

The same sources said Platini was hoping to reclaim a bonus worth some 1.8 million euros "for his contribution to the success of Euro 2016 in France", despite the fact he was suspended when the tournament was staged.

Platini was expected to succeed Sepp Blatter as FIFA president in 2016 but fell spectacularly from grace a few months earlier.

The 64-year-old was suspended by world football's governing body in late 2015 over a controversial payment of two million Swiss francs (1.8 million euros, $2 million) from Blatter.

The payment, made in 2011 when Blatter was seeking re-election as president, was related to work carried out by Platini between 1999 and 2002. Platini has always insisted he did nothing wrong.

Speaking to AFP by telephone, Platini said: "Through my lawyer, I am asking for the contractual elements to be applied."

Platini contested the claims that he is seeking 7.2 million euros. His Swiss lawyer, Vincent Solari, argues he "is entitled to a year's salary as well as a contractually agreed bonus, that is to say three million Swiss francs ($3 million, 2.7 million euros)."

Solari added that European football's governing body -- over which Platini presided from 2007 until his ban in 2015 -- were contractually obliged to pay him for almost two years even if he was unable to work "for whatever reason" and had, "on that basis", already paid him one year's salary.

They had, he insisted, "thereby acknowledged that the salary was owed regardless of the suspension".

However, the matter appears likely to end in a court battle. Solari said UEFA were now contesting the claim "without any motivation".

One source said Platini had first taken action to reclaim the money in the autumn of 2016 but said the triple Ballon d'Or winner had not yet gone to court "because he knows he has no chance of winning".

Blatter, also speaking to AFP, said he found the Frenchman's demands "shocking, because I thought he was fighting above all else to save his honor, his integrity, his values".

Blatter was suspended for six years in the wake of the scandal over the payment to Platini, having presided over world football for 17 years.

Platini's suspension ended on October 6 and he has said he now hopes to find a new role in football.

The revelations about his pay dispute with UEFA come in the same week that he released a new book, the title of which translates as "Between Us".

French President Emmanuel Macron this week backed Platini to return to the game, telling radio station RTL: "If you are ready to get involved again in football, in sport, in our country, that would make me happy."

However, the former Juventus and Saint-Etienne playmaker remains linked to a corruption investigation in his home country relating to awarding of the 2022 World Cup to Qatar.

In June this year he was held and questioned by French anti-corruption police investigating the 2010 vote to award the tournament to the Gulf state.

According to France Football magazine, a "secret meeting" took place in November 2010 at the Elysee Palace in Paris between former French president Nicolas Sarkozy, Qatar's then-Prince (now Emir) Tamim bin Hamad al-Thani, and Platini, who was then both UEFA president and FIFA vice-president.

Just over a week later, FIFA voted to give Qatar the 2022 hosting rights.