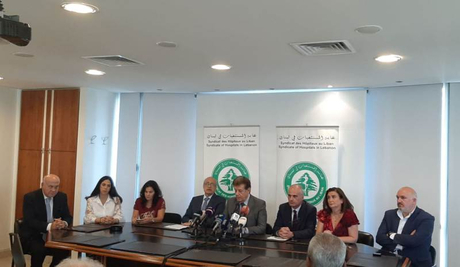 Hospital syndicate head Suleiman Haroun said unpaid bills and a lack of access to the U.S. currency meant the situation could deteriorate fast.

Current medical "stocks in the country will not last more than a month," Haroun warned, in a statement carried by the National News Agency.

We "request banks to facilitate money transfers in U.S. dollars for importers of medical supplies," he said.

If not, "hospitals will as a warning for a single day on Friday, November 15, stop receiving all patients except emergency cases" including for dialysis and chemotherapy, he said.

Banks in Lebanon have in recent days halted all ATM withdrawals in dollars and severely restricted any conversions from Lebanese pounds to dollars.

Most Lebanese are instead having to buy the dollars from money changers at a higher exchange rate, in what amounts to the de-facto devaluation of the local currency that has sparked price hikes.

Haroun's warning came after almost 100 medical stock importers on Saturday warned medical supplies would run out in a month.

They urged the central bank to provide them with key dollars to bring in life-saving equipment and medicine, and called on the state to speed up payment of accruals amounting to more than $1.4 billion.

Lebanon has since October 17 witnessed an unprecedented popular uprising against everything from power cuts and poor social security to alleged state corruption.

"We're dying at the gates of the hospitals," has been a common refrain among protesters, many of whom cannot afford decent healthcare.

The government yielded to popular pressure and stepped down last week, and the World Bank has urged for the quick formation of a new cabinet to prevent the economy from further deteriorating.

Not to worry Baba el kill will rescue the nation as he has promised many times in the past.