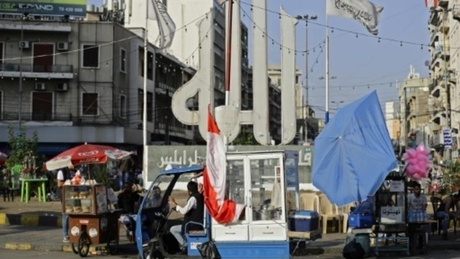 The main square in Tripoli feels like a fairground during the day, when thousands of skiving schoolchildren and students meet to throw their weight behind Lebanon's anti-government protest movement.

With their schoolbags on their backs and Lebanese flag in hand, al-Nour Square is abuzz with the laughter and chants of the northern city's young people.

Girls -- veiled or not -- take turns to have the red, white and green colors of the national flag painted on their face while others dance to pop music or pose for selfies.

Since Wednesday, university and high school students across the country have massively deserted their classrooms to join nationwide streets protests.

"What we learn here on the square is more important than what we learn in school," says Nour, a 17-year-old girl.

"We learn how to build a future and a nation," she says to noisy cheers from the friends swarming around her. "We want to find jobs and not just hang our diplomas on a wall."

More than half of the population in Tripoli -- Lebanon's second largest city after Beirut -- lives on or below the poverty line, according to the United Nations.

Tripoli has been rocked by deadly clashes involving Islamists over the years, including as part of the fallout of the more than eight years of civil war in neighboring Syria.

"Here, if you're not wanted by the police, you're wanted for an electricity or water bill," says a young man near the square.

Al-Nour Square has become the beating heart of an unprecedented cross-sectarian and leaderless protest movement against poor services and government corruption.

Often outstripping the capital Beirut for turnout, the Tripoli protests have turned the square into a permanent encampment for demonstrators.

Al-Nour square is full of vendors selling juices, sodas, coffee, sandwiches and corn on the cob from carts.

Some have made a business of selling flags and other protest paraphernalia, while one teenage boy is trying to flog a batch of balloons with cartoon character designs.

An older man walks around the square serving glasses of "erk sous" -- a traditional cold liquorice drink -- from a huge container strapped to his back.

Tripoli has burst into life with the protest movement, which many in the long-marginalized city have seized upon to voice a long list of grievances.

Al-Nour Square, in the middle of which stands a huge sculpture of the word "Allah", has become a home for protesters who show so sign of wanting to leave it.

"We took to the streets to demand our rights. We're tired, we want to prepare our future and achieve our dreams," says Lynn, a 14-year-old schoolgirl.

"We don't want to have to live abroad," she says, referring to the thousands of young graduates who leave Lebanon, where youth unemployment tops 30 percent to look for opportunities.

Some of the most electrifying moments of Lebanon's "revolution" were the rave parties and concerts held on al-Nour Square, watched live on TV by a bemused nation.