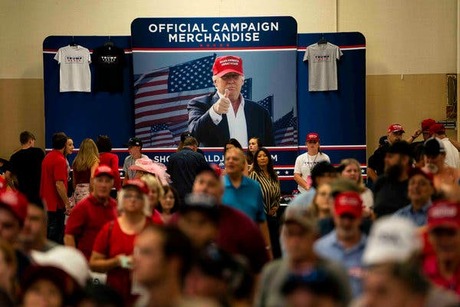 President Donald Trump on Friday boosted his uphill campaign to claw back some of the African American vote, a big component of the Democrats' base, with a campaign trip to Georgia.

The launch of a "Black Voices for Trump Coalition" in Atlanta builds on the Republican president's bid to reverse overwhelming hostility from African Americans.

"We've been invited and I think it will be fantastic," he said as he left the White House.

"We're doing very well with African-Americans. I think a big factor is the fact that they are having the best economic year they've ever had in the history of our country," he said.

The reality is that Trump is overwhelmingly opposed by black voters and while they comprise less than 14 percent of the overall population, their fierce loyalty to the Democratic party makes them a potent force.

In his surprise 2016 election triumph, Trump won only eight percent of the black vote, compared to 88 percent for his Democratic opponent Hillary Clinton.

For years, he brazenly promoted the hoax conspiracy theory that then president Barack Obama, the first African American to win the White House, was not born on US soil and therefore was illegitimate.

Early in his presidency, he caused uproar when he appeared to fail to condemn a racist 2017 march by white supremacists in Charlottsville, Virginia, saying there were "fine people on both sides."

More recently, he attacked a revered black congressman, the late Elijah Cummings, by describing his heavily African American city of Baltimore as "rat and rodent infested."

A Quinnipiac University poll in July found that 80 percent of African Americans think Trump is racist.

"Black Americans have never had a better champion than President Trump," said Katrina Pierson, a Trump 2020 reelection campaign adviser, predicting that the new "black voices" coalition would help him to a second term.

As part of the charm offensive, Trump announced Friday on Twitter that he would be hosting the winners of a pro-Trump talent show dubbed #MAGACHALLENGE. Showcased in the tweet: a right-wing black rapper.

"It's a travesty, it's hypocritical, it's insulting," he told AFP.

"What this is really about is trying to minimize black turnout for the other side," he said. "They don't even need to win 20 percent of the black vote, if they can cause enough confusion so that the vote goes down, then it's a victory for them."

In a close race, small margins can make a big difference.

Clinton was hurt by low turnout among blacks in key swing states, like Wisconsin, that flipped to supporting Trump. In 2020, Democrats will want to try and recover every last one of those votes.

As a former vice president under Obama, Joe Biden is easily the Democrat with the strongest support from African Americans, but his candidacy has faltered recently. Up-and-coming rivals like Elizabeth Warren are so far failing to excite black voters, giving Trump a possible opening for his bid to weaken that seemingly rock-solid Democratic constituency.