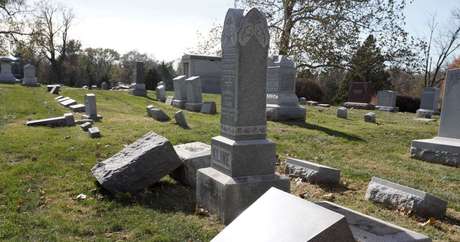 Vandals desecrated more than 80 graves at a Jewish cemetery in the western Danish town of Randers, police said Sunday.

"More than 80 gravestones were daubed with green graffiti and some were overturned" at the Ostre Kirkegard cemetery, a statement said.

"There are no symbols or words written on the gravestones but paint has been daubed on them," the Ritzau news agency quoted police spokesman Bo Christensen as saying.

Police said a complaint had been made Saturday but they did not know when the vandalism had occurred.

The Randers burial ground dates back to the early 19th century when the town's 200-strong Jewish community was Denmark's largest outside the capital Copenhagen, which is today home to most of the country's 6,000 Jews.

Copenhagen's Great Synagogue was targeted in a 2015 shooting which saw one security officer killed after an earlier attack on a conference on freedom of expression also left one person dead.

Five police were injured in the twin attacks which saw police gun down 22-year-old perpetrator Omar El-Hussein, a Danish citizen of Palestinian origin.