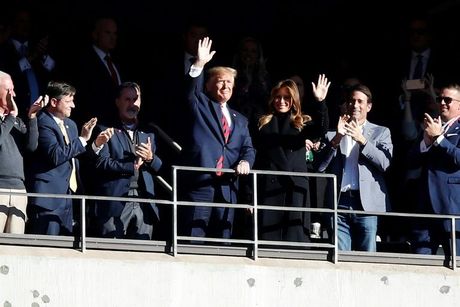 President Donald Trump traveled to the deep South on Saturday to watch a hotly anticipated college football match and bask in the adulation of fans in the staunchly conservative region.

Trump, the target of an impeachment investigation that has consumed Washington, was greeted with loud cheers from the crowd of more than 100,000 when he entered his luxury box at Bryant-Denny Stadium in Tuscaloosa, Alabama.

Some chants of "USA" also rang out as Trump waved from near midfield.

Later in the game, the US president received another loud ovation as he was shown on the stadium screens, though there were also some scatted boos as he waved.

The football game between Louisiana State University and the University of Alabama was the third sporting event that Trump has attended in the past two weeks.

The reception he received Saturday was far warmer than the one he got on October 28 when he attended a World Series game in deeply liberal Washington between the Nationals and the Houston Astros.

The crowd had been cheering military members at the game but switched to loud and sustained booing when the stadium's video display showed Trump. Fans then started chanting "Lock him up!"

On November 3, Trump returned to his hometown of New York to take in a UFC fight, where he was greeted with both cheers and jeers when he walked into Madison Square Garden.