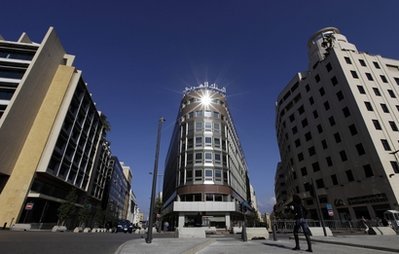 Lebanon's economy should be able to survive the political turmoil that has seen the appointment of a Hizbullah-backed premier due to the strength of the country's banking system and replete foreign currency reserves, analysts say.

"The financial defense lines are currently the strongest in Lebanon's history," said Marwan Barakat, chief economist at Bank Audi, one of the leading banks in the country.

"The Central Bank has $30 billion (22.5 billion Euros) in foreign currency reserves which cover 78 percent of depositors in Lebanese pounds," he added. "Even if these 78 percent convert their money into dollars, we're covered."

The collapse of the Western-backed government of Saad Hariri on January 12, following a long-running standoff with the Iran- and Syrian-backed militant Hizbullah, initially rattled some Lebanese who rushed to convert their savings into dollars or transferred money out of the country.

But the profile of the man picked to succeed Hariri -- billionaire businessman Najib Mikati, who is close to both Saudi Arabia and Syria -- seems to have had a reassuring effect on economic circles, at least for now.

"The political equation today is not very worrisome for the economy," said a Swiss banker who works in Lebanon and other countries in the Middle East.

"And Mikati's nomination is reassuring to economic circles because he is one of them," he added, requesting anonymity.

The 55-year-old magnate owns the M1 Group, an international investment holding group with shares in South Africa's telecom MTN Group and French fashion line Faconnable, and has interests in real estate, oil, gas and other industries.

Forbes magazine in 2010 estimated Mikat's net worth at $2.5 billion, making him one of Lebanon's richest men. He ties for rank 374 on the Forbes list of billionaires with his brother and business partner Taha.

But despite his strong business credentials, there are fears that like his predecessors, Mikati will not be able to tackle some key and long-awaited reforms, notably in the power sector.

"The continuous delay in implementing reforms is a real problem," said Nassib Ghobril, head of economic research and analysis at Byblos Bank Group.

"We've been talking for 10 years about reforms and nothing happens."

Another key concern for 2011 is growth. The country since 2001 has experienced uninterrupted growth -- apart from 2006 following the war between Hizbullah and Israel -- and has largely weathered the global economic crisis.

Several financial institutions have forecast five percent growth in 2011, down from about seven percent in 2010.

Ghobril said that should the country's economy slow down that would lead to a decline in tax revenues to the state which in turn would increase the public deficit.

Central Bank governor Riad Salameh warned earlier this month in an interview with Agence France Presse that should the political turmoil that has shaken the country persist that could affect improved debt-to-gross domestic product ratio and growth rates in 2011.

And despite its solid banking sector, Lebanon staggers under a public debt of more than $50 billion (37.5 billion Euros), accumulated since the end of the 1975-1990 civil war.

For now, however, the economic outlook as relates to the political crisis is not gloomy, experts say.

"The primary liquidity of banks represents 48 percent of deposits, one of the highest ratios in the world," Barakat said. "So the banks are well prepared to withstand pressure."