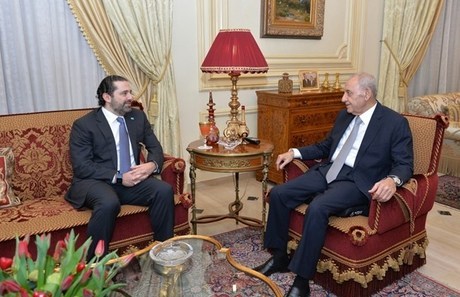 Caretaker Prime Minister Saad Hariri on Tuesday said nothing can bring enmity to his relationship with Speaker Nabih Berri, reportedly after the latter “failed” to convince Hariri to lead the upcoming new government.

Center House sources quoted Hariri as saying: “Speaker Berri is a big brother (to me), and his big heart does not bear hostility with me forever. My friendship and respect for Berri transcends all considerations. Nothing in the world is capable of making us enemies,” al-Mustaqbal Web reported.

Earlier, Berri was quoted as saying that he made the "utmost" effort to convince Hariri to lead the upcoming government and that he would be “on feud with him forever if he refuses to line-up a new Cabinet.”

The government resigned on October 29 but stayed on in a caretaker capacity and parliamentary consultations on forming a new government are yet to be held.

"al-Mustaqbal Web reported" And there I thought for a second that Future no longer existed...

Nothing in the world is capable of making us enemies,” al-Mustaqbal Web reported.
Somehow I remember the same words being said by Hariri back in 2006 about his relationship with M14 and then he turned coat against every single one of them....lol His word is gold.