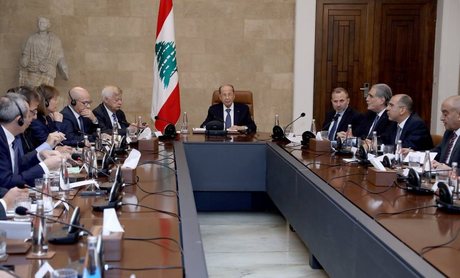 President Michel Aoun held talks Tuesday in Baabda with the United Nations Special Coordinator for Lebanon Jan Kubis, who was accompanied by the ambassadors representing the members of the International Support Group for Lebanon (ISG).

A statement issued by Kubis’ office said Aoun informed the participants about the current political and economic situation in Lebanon and its root causes.

“He outlined the envisaged way forward, notably as regards the forming of the new government soon through a process of binding parliamentary consultations. He also requested assistance of the international community in dealing with the economic situation and reforms as well as with return of Syrian refugees back home,” the statement said.

In his comments on behalf of UNSCOL, Special Coordinator Kubis reminded Aoun of his call in an address to the nation for “a new Government is that it lives up to the aspirations of the people, earns their confidence first before that of the Parliament, with the aim to restore people’s confidence in their state and that ministers to be selected based on their competence.”

“Kubis calls upon the leadership of Lebanon to urgently nominate the Prime Minister-designate, start the mandatory process of parliamentary consultations and to maximally accelerate the process of the formation of the new government of personalities known for their competence and integrity, trusted by the people,” the statement said.

It added: “Such a Cabinet, formed in line with the aspirations of the people and supported by the broadest range of political forces through the Parliamentary vote of confidence, will also be in a better position to appeal for support from Lebanon’s international partners.”

The Special Coordinator also underlined that the national interest and unity of Lebanon must be put above any other considerations, adding that “continuous protection of peaceful protesting civilians by the security forces, also against provocateurs, maintenance of law and order and the functioning of the state and its economy without using force or violence is the paramount responsibility of the leadership of Lebanon and its security forces.”

“The Special Coordinator notes that it is essential that the authorities prioritize urgent measures to maintain the country’s monetary, financial and economic stability as well as to put the necessary reforms, good governance, end to corruption and accountability without impunity on the right and fast track in a transparent manner,” the statement added.

Warning that the financial and economic situation is critical, the statement said the Lebanese government and other authorities “cannot wait any longer to start addressing it, starting with measures that will give the people confidence and guarantees that their licit life-time savings are safe, that they can continue their normal life.”

“The continuous absence of executive and legislative action only compounds the crisis, contributes to social instability,” the statement warned.

It added that the U.N. is ready to support urgent and long-term steps and measures that will contribute to fighting and preventing corruption and strengthening good governance and accountability.

He's a man of his words. For two weeks he's been telling everybody that "the government will be formed soon" and he will keep saying this to everybody for the next two, three, four and more if he has to, this is how committed to it he is.