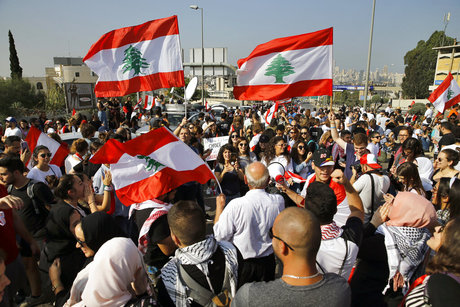 Large numbers of protesters were on Wednesday rallying near the presidential palace in Baabda, in the first major demo in the area since the eruption of the popular uprising on October 17.

The protesters were flocking to the area from Beirut, Tripoli and several Lebanese regions.

Scuffles erupted as the protesters tried to remove barb wires and metallic barriers.

“Security forces managed to stop them after they hurled empty water bottles and stones at them,” the National News Agency said.

Responding to a Republic Guard officer’s request that they form a delegation to meet with the president, the protesters chanted: “The people demand and don’t negotiate!”

Protesters have been blocking main roads since Tuesday evening, angered by what they viewed as the president ignoring their demands in nearly a month of rallies, and after a protester was shot dead.

Aoun said on television that Lebanese who did not see any decent person in power should "emigrate" -- a comment that, despite the presidency scrambling to clarify it, immediately sent protesters onto the streets.

One man died of gunshot wounds overnight after an army officer’s driver opened fire at a road-blocking protest in Khalde south of the capital, in the second such death since the start of the largely peaceful protests.

Lebanon's unprecedented protest movement has since October 17 called for a complete overhaul of a system they charge is incapable of providing the most basic services and syphoning off state funds.

After the government stepped down on October 29, protesters demanded a fresh cabinet of experts not affiliated with any of the traditional political parties, which are divided along sectarian lines.

But Aoun in the interview argued that a government made up solely of technocrats would not be able to set policies and would not represent the people.

He criticized the street movement's lack of leadership, after previously saying he would be prepared to meet representatives to hear their demands.

The protests erupted spontaneously last month against a government plan to tax calls made via free mobile phone applications such as WhatsApp.

But they have since morphed into a mass cross-sectarian movement denouncing everything from unemployment and rampant poverty to poor healthcare and endless power cuts.

The World Bank says around a third of Lebanese live in poverty and has warned the country's struggling economy could further deteriorate if a new cabinet is not formed rapidly.

The former cabinet will remain in a caretaker capacity until a fresh one is formed, but required parliamentary consultations on the matter have not even been scheduled yet.

Forming a government typically takes months in Lebanon, with protracted debate on how best to maintain a fragile balance between religious communities.

In the interview late Tuesday, Aoun suggested a new cabinet made up of technocrats and politicians.

He did not deny the existence of U.S. pressure to exclude his powerful ally, Iran-backed Hizbullah, from any future government, but said he could not be forced to do so as they represented "a third of Lebanese."

Demonstrators should be very careful. The same Basij that brutally suppressed the Iranian peaceful Green Revolution in 2010, are the same running Lebanese politics via Hizbollah and the presidential/FPM marionette. The Basij will try to divide the demonstrators, create incidents, but worst, try to create confrontation with the army. Best course is to avoid weekday demonstrations and joined effort for a massive Sunday demonstration (good weather) with clear demands as a show of unity, resolve and showing a road map for a brighter future.