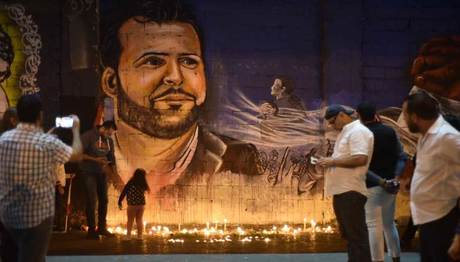 The body of Alaa Abu Fakhr named as the “martyr of the revolution” by some was laid to rest on Thursday in his hometown of Choueifat.

Abu Fakhr, 38-year-old father, was shot dead in front of his wife and son by an army intelligence agent at a protest Tuesday night in Khaldeh.

His death marked the first such fatality since the economically driven demonstrations against the government engulfed Lebanon on Oct. 17.

He has become an icon of the revolution.

Mourners from across the country flooded Choueifat, shouting "revolution, revolution".

Carrying Lebanese flags, mourners joined his family in Choueifat for a religious ceremony and then the burial.

"We are free revolutionaries and we will continue our movement," the mourners chanted as they marched behind Abu Fakhr's coffin, which was draped in the Lebanese flag.

News of his death late Tuesday was met with shock and anger among protesters in Beirut and major Lebanese cities and towns.

Demonstrators that night blocked roads and set tires and rubbish bins ablaze, then rallied for massive nationwide protests on Wednesday during which they held up pictures of Abu Fakhr.

The army intelligence agent involved in the Khalde incident was referred to the judiciary on Wednesday.

The Army Command’s Orientation Directorate said in a statement: “The Intelligence Directorate has referred First Adjutant Charbel Hjeil to the relevant judicial authorities after interrogating him over the incident that resulted in the martyrdom of Alaa Abu Fakhr.”

In the northern port of Tripoli, Lebanon's second city, a street artist has painted a commemorative mural of him on the facades of a building overlooking Al-Nour Square, the main hub of the largely peaceful protests for nearly a month.

Abu Fakhr is the second fatality since the start of the demonstrations. Another protester was shot by a man as demonstrators blocked the airport road.

I assume he is not Shia by any standard.