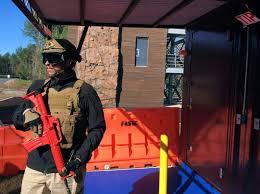 Suffocating white smoke engulfed the corridor as the sound of gunfire rang out, with the blinded U.S. officials inside crawling to safety by latching onto one another's clothes and groping the wall.

The scene was not Benghazi or other war zones but the normally quiet forests of southern Virginia where the State Department on Thursday opened the largest training facility of its kind, part of a bid to better protect U.S. personnel abroad in uncertain times.

The Foreign Affairs Security Training Center, stretched over 550 hectares (1,350 acres) at the Army's Fort Pickett, offers instruction on everything from rushing out of an urban riot to slamming the brakes on wet asphalt to basic martial arts and emergency medical skills.

The decision to build the center -- along with jockeying among lawmakers on the location of the $426 million project -- gathered pace after the September 11, 2012 attack on the U.S. consulate in Benghazi, Libya by radical Islamists. Four Americans were killed inside the smoke-clogged building including the ambassador, Chris Stevens.

A senior State Department official said that the training center, which aims to teach 10,000 people per year, showed the changing nature of threats, with militants no longer focused primarily on assassinating top dignitaries or hijacking airplanes.

"They don't want to get the secretary of state; they want to get mom and pop that are walking down the street on a Saturday afternoon," the official, speaking on condition of anonymity, told reporters on a tour of the site in Blackstone, Virgina, 275 kilometers (170 miles) south of Washington.

In a shift, the center will bring in not only agents from the Diplomatic Security Service, which runs the facility, but ordinary U.S. government employees abroad and even their spouses and adult children, who will be encouraged but not required to undergo training if heading overseas.

"From 9/11 on, people are realizing that security is everybody's responsibility," the official said.

Another senior official said in Washington that personnel sent to high-risk posts will be required to return every five years to Blackstone for fresh training adapted to new threats. The State Department eventually plans training for all U.S. diplomats, even those heading to safer posts.

The complex features its own mock embassy that overlooks a simulated urban area, where actors recruited from a contractor -- who included on one occasion a retired African ambassador -- present scenarios that range from attacks to comparatively mundane problems such as how to drive in reverse when a crowd is gathering.

The official in Blackstone likened the setting to a video game, with vivid perceptions of threats, even if all participants ultimately know the incidents are not real.

"Believe me, when you are down there, it really does get your blood pressure going," the official said.

Speakers pipe in sounds that, according to one trainer, can quickly make the streets "sound like Manhattan or sound like a village outside Kabul."

The center also features a 40-door indoor maze, designed to teach how to handle break-ins and arrests, as well as five driving courses, more than the number in separate training centers in the Washington area for the Secret Service and the FBI.

A skidpad -- permanently flooded with 363,000 liters (96,000 gallons) of reusable water underneath -- trains drivers on how to navigate dangerous wet turns in their Dodge Charger police interceptors.

Beds of rock and towering piles of asphalt show U.S. personnel how to handle conditions they may find abroad -- and how, crucially, to avoid crippling damage to their vehicles.

"You may never actually encounter these situations," the official said. "But the idea is to be confident so you can be prepared for anything."