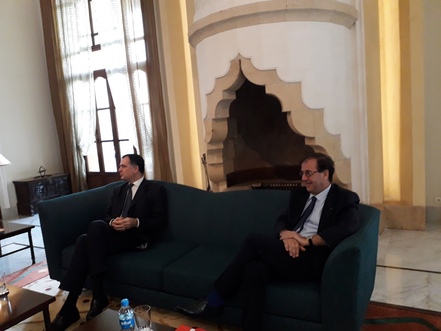 The French envoy in Lebanon said France has no solutions for the crisis in Lebanon but cautioned that “the difficulties are great and of concern to all,” al-Joumhouria daily reported on Friday.

Director of the Middle East and North Africa at the French foreign ministry, Christophe Farnaud said an “efficient and effective government capable of taking decisions that respond to the aspirations of the Lebanese people and able to restore confidence must be formed,” according to the daily.

Farnaud said his visit to Lebanon aimed to “listen to the Lebanese’ demands, not to suggest solutions” to the crisis.

“France has always stood by Lebanon’s side, in good times and difficult times. We are aware of the crisis Lebanon is facing, which is an economic, political and social crisis,” he said.

“The solution must be Lebanese. We do not have solutions. The ongoing efforts must be based on three points: speed, effectiveness and credibility," said the French envoy.

Farnaud is expected to meet US Assistant Secretary of State David Schenker in Paris. He said: "It is the nature of our work to exchange views from the core of our responsibilities."

Lebanon has reacted angrily to France's announcement, demanding that France send the Foreign Legion to restabilize and anti-instabilitize Lebanon, respectively, without delay.
"It is the nature of our work to exchange views from the core of our responsibilities."
Schenker replied, "We regard differences for both sides as crucial to any progress we designate as such."