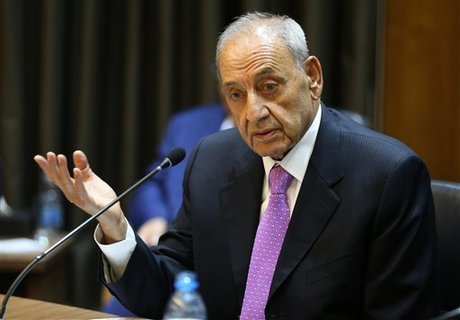 Speaker Nabih Berri warned that the situation in Lebanon is getting more “complicated,” emphasizing the need for a quick “resolve” for the crisis, al-Joumhouria daily reported on Saturday.

“Things are becoming more complicated and a quick solution must be found to get Lebanon out of this crisis,” Berri told his visitors, following the latest wave of demonstrations rejecting the nomination of Mohammed Safadi for the position of PM.

“A lot of time has been wasted, by now the state budget of 2020 should have been approved to then proceed to the application of urgent reform items that have been agreed upon,” said Berri.

To a question whether Lebanon is going to benefit from the CEDRE conference despite the latest developments in the country, Berri said the visiting French envoy assured it will.

“CEDRE still stands and was not affected by the events in Lebanon,” French envoy Christophe Farnaud, told Berri during a two day-visit to Lebanon where he met Lebanese officials.

Lebanese protesters demanding radical reform since October 17 have reacted with anger to the reported designation of Sadafi as new prime minister they regard as emblematic of a failed political system.

You want the situation to resolve quicker? RESIGN!!!

No shit Sherlock, and it is going to get even worse until you and your degenerate political associates decide to listen to the people's interests and not your own.

Been a month---probably would have been a lot simpler if you would have proposed solutions then. Just sayin...

Ya tric, stop behaving stupidly. The country is about to rid itself of the political filth, pick the right side for once.