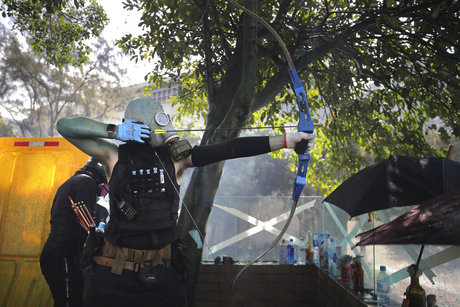 A police officer was struck by an arrow fired by a Hong Kong protester on Sunday, as fierce clashes raged around a campus which has turned into a base for a pro-democracy movement switching tactics as it plunges the divided city deeper into turmoil.

Protests have tremored through the global financial hub since June with many in the city of 7.5 million people venting fury at eroding freedoms under Chinese rule.

China has repeatedly warned that it will not tolerate the dissent, and there have been concerns that Beijing could send in troops to put an end to the unrest.

Chinese President Xi Jinping this week issued his most strident comments on the crisis, saying it threatened the "one country, two systems" model under which Hong Kong has been ruled since the 1997 handover from Britain.

Activists have vowed to wreak further havoc on Monday and "squeeze the economy", in a follow-up to a week of chaos which left city streets strewn with debris, saw white-collar workers take to the streets and black-clad protesters use homemade catapults and raid campus sports storerooms for archery bows.

On Sunday scores of activists dug in at Hong Kong Polytechnic University (PolyU) on Sunday vowing to defend it from police and to maintain a blockade on the nearby Cross-Harbor Tunnel, which has been closed for several days.

Protesters need "a base to keep our gear and have some rest at night before another fight in the morning," said 23-year-old PolyU student called Kason.

They hurled petrol bombs at advancing water cannon and fired rocks from a homemade catapult from the university roof, leaving police struggling to make headway across roads littered with debris.

Images shared by police showed an arrow embedded in the calf of an officer outside the campus.

Police decried the use of "lethal weapons" and declared the campus a "riot scene" -- a rioting conviction carries up to 10 years in jail.

Protesters last week engineered a "Blossom Everywhere" campaign of blockades and vandalism, which forced the police to draft in prison officers, shut down large chunks of Hong Kong's train network and closed schools and shopping malls.

The movement, characterized by its fluidity and unpredictability, has started to coagulate in fixed locations, showing their ability to switch tactics.

The protests started against a now shelved bill to allow extradition to China but have billowed to encompass wider issues such as perceived police brutality and calls for universal suffrage in the former British colony.

Two people have died this month as the violence worsened, while the financial hub has been pushed into a recession by the turmoil.

Hong Kong's airport authority on Sunday said October traffic figures were down 13 percent on last year with 5.4 million passengers as the economy takes a battering.

A poster circulating on social media called for the "dawn action" to continue on Monday.

"Get up early, directly target the regime, squeeze the economy to increase pressure," it said.

Earlier on Sunday, dozens of pro-government supporters gathered to clear barricades near the university campus -- a sign of the divisions slicing through the city.

Many residents are wearied by the sapping protests. Others support the Chinese-backed city government.

Some applauded a Saturday cameo in a clean-up by Chinese troops from a garrison of the People's Liberation Army in Kowloon, who burst from the barracks in a rare and highly symbolic appearance on Hong Kong's streets.

The garrison is usually confined to the barracks under Hong Kong's mini-constitution, although it can be deployed under the request of Hong Kong's government to help with public order breakdown or natural disasters.

Hong Kong government, which presides over a city which enjoys greater freedoms than the mainland, said it did not ask the PLA for help on Saturday.