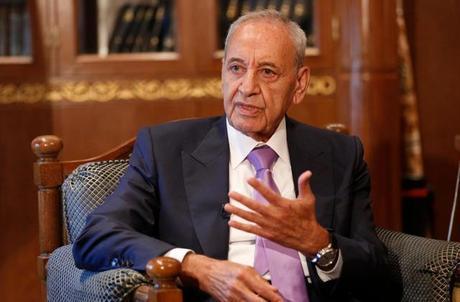 Speaker Nabih Berri said the situation is getting more dangerous in Lebanon, stressing the need for action before things spiral out of control, al-Joumhouria daily reported on Monday.

“The country resembles a sinking ship that is sinking little by little. If we don't take the necessary action, it will sink entirety,” Berri was quoted as telling his visitors referring to the economic situation.

On the formation of a new government, he told his visitors that the governmental situation is at a stalemate waiting for developments at any moment.

They said the Speaker is pinning hopes that caretaker PM Saad Hariri agrees to lead a new government in light of the "dangerous" situation the country has reached.

How about you as a premier, step up and donate only half what you, your wife, children owe the ship?

The ship started sinking in 2006--you just noticed---cgz. Maybe you should do something about it instead of lamenting. You could, idk, resign and set an example for everyone.

Did he not say that the nation was fine 2 months ago?

Lebanon is in financial crisis. Not enough dollars in circulation to support the economy. Donations from EU, the US and the GCC have dried up because they have figured out that the political leadership just takes the money and passes it out as political patronage to party hangers on and the money is never used for its intended purpose. Berri is the king of paying out political patronage to his zilm. He is the king of the NoShow government employee. They just draw a paycheck, but never show up for the job which supposedly justifies the paycheck.

So, yes, Mr. Berri, Lebanon is a sinking ship, and you are one of its captains driving it under the waves.

Hi @beiruti how about mentioning the other captain of that ship called Lebanon, I'm referring to the Bankrupt captain who is so incompetent at the point to not being able to sustain his own businesses the same way his colleagues do... I won't cite name here but u know who I'm talking about, That one who must pay millions to eat a South African model that can only be found in the wall of mechanical workshops...

Yes, I said Berri is "one of the captains". There are many others. Gebran Bassil who has become a billionaire in government service. Walid Jumblatt who has wealth but no visible means of its source. Saad Hariri pulls on the Saudi tit, Nasrallah, who likewise supports himself and the Hezbollah leadership in luxury while encouraging the poor Shiites to enlist and die in Syria -- resisting the Israelis?

Geagea has tied his fate and fortune to Hariri to secure funding for his political patronage, and Tony Frangieh is a Gibran Bassil want to be, vying for a nod from Hezbollah to become the next president.

There are many captains with many confessional agendas, which is why the ship is sinking.

I believe he read my post where I compared Lebanon to the titanic, though I’m sure of one thing, he isn’t going to behave like the captain or the orchestra. He will jump ship with the cowards, because all warlords are deep inside jobana.