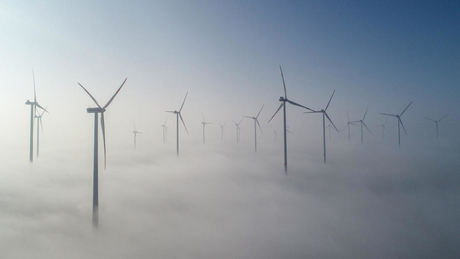 Switching to renewables could cut the health impacts of air pollution from power generation as much as 80 percent by mid-century, experts said Tuesday.

Scientists and environmental groups have long advocated a switch to low-carbon power to cap the rise in global temperature to two degrees Celsius (3.6 Farenheit), as stipulated in the Paris climate treaty.

Despite several nations committing to "net-zero" emissions by 2050, few have so far explained precisely how they plan to get there.

Emissions from power generation account for around 40 percent of all energy-related carbon pollution, and demand for energy is predicted to rise globally for years to come.

Despite an overwhelming scientific consensus on the need to slash emissions, relatively little attention has been paid to the human health impacts of climate action.

A team of experts at the Potsdam Institute for Climate Impact Research (PIK) used climate and energy efficiency models to sketch out three scenarios for decarbonizing the power sector by 2050.

Writing in the journal Nature Communications, they then combined their calculations with human health indexes and analyses of the emission levels throughout a power unit's lifespan.

They found that a scenario where the majority of energy is derived from solar and wind power could cut adverse health effects from electricity production by 80 percent compared with our current fossil-heavy economies.

The World Health Organization estimates 4.2 million people die prematurely each year due to air pollution, much of which comes from the burning of fossil fuels for energy.

The PIK models predicted current energy trends would see six million years of life lost globally to air pollution by 2050. If the next three decades are dominated by renewables, that figure drops to about one million.

"This is mainly due to a reduction of air pollution from combusting fuels," Luderer said.

He said all decarbonization pathways the team studied showed significant health benefits, but the renewables-led approach showed by far the biggest health upside.

The study also looked at the environmental and ecological impact of green energy generation heading towards mid-century.

While bioenergy -- the harvesting and burning of CO2-absorbing crops for electricity -- has the potential to be low-emission, the team found such schemes would have significant environmental consequences.

In fact, measured per kilowatt-hour, the team found that bioenergy required roughly 100 times the amount of land needed to harvest the same energy from solar panels.

"Land is a finite resource for our planet," said Alexander Popp, head of land use management at PIK.

"Given the growing world population with a hunger for both electricity and for food, pressures on the land and food systems will increase, too."

The United Nation's Intergovernmental Panel on Climate Change in August released a landmark assessment of how land can both ease and contribute to the climate emergency.

It warned of looming tough choices, and a radical reduction in pastureland for livestock if the more ambitious 1.5-C Paris temperature benchmark is to be met.