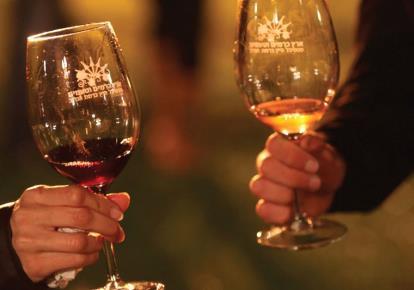 Yaakov Berg recently lost a battle against Europe over labeling his wine, so when the United States announced it no longer considered the Israeli settlement where he lives illegal, he popped open a bottle.

His winery is located in the hills near Psagot, an Israeli settlement adjacent to the Palestinian city of Ramallah in the occupied West Bank.

It is one of dozens of Israeli settlements across the West Bank and east Jerusalem that have long been seen as illegal by the majority of the international community.

But on Monday, the U.S. broke that consensus by declaring they were "not, per se, inconsistent with international law", sparking global criticism and Israeli jubilation.

Even if Berg didn't quite bring out the champagne, the news put him in the mood for celebration.

"It is an historic day," he told AFP.

Producing around 400,000 bottles a year, his winery exports its products to both Europe and the United States.

But in 2015, the European Union issued guidelines to its member states on labeling products identifying their origin as from territories occupied by Israel.

Furious, Berg fought hard against the rule, working with the European Jewish Organisation and others to take it to the European Court of Justice.

But last week, Europe's highest court backed the original guidelines, saying settlement products must be clearly identified so customers can make informed choices based on "ethical considerations and considerations relating to the observance of international law."

For Berg, the ruling was "a racist, anti-Israel and anti-Semitic decision" and an attempt to delegitimize Israel.

"Seventy-five years after the yellow star was forced onto the Jews of Europe, we will not accept being labelled again."

But only a week after the ECJ ruling, the settlement movement was given a boost with the White House's announcement of the U.S. policy shift.

Berg tells the story of the origin of his wine's label as evidence of the long Jewish connection to the land in the West Bank.

While excavating a cellar during the vineyard's construction, a coin was discovered that is estimated to date back to the second century AD and bears the image of a vase and grapes, which were made the symbols of the winery.

"This is the historical land of the Jewish people -- all the bible stories took place here -- how could you say that Jews do not have the right to live here?" Berg asked.

"The U.S. statement is important for the future of this region."

More than 600,000 Israelis live in settlements in east Jerusalem and the West Bank, alongside around 2.9 million Palestinians.

Israel seized control of the territories, seen as pivotal parts of any future Palestinian state, in the 1967 Six-Day War.

Settlements are seen as one of the most difficult issues in the decades-long Israeli-Palestinian conflict.

Settlers reject that label, blaming Palestinian intransigence for the lack of progress.

Miri Maoz-Ovadia, spokeswoman for the Binyamin Regional Council, which represents settlements north of Ramallah in the central West Bank, said the US decision shows you "cannot cut the historical connection between this land and the Jewish people."

Born in a settlement, the mother-of-three thinks closer ties between Palestinian and Israeli communities is the key to ending the conflict, and that the world should "stop imagining that separating them can lead to peace."

"In Europe, the United States and elsewhere, they must understand they cannot expel Jews from their lands."

Among his vines, Berg isn't thinking yet of a potential decline in sales in Europe, or even a possible uptick in the U.S.

Instead he sees his work as an ideological fight, one that for now has the backing of the world's largest superpower.