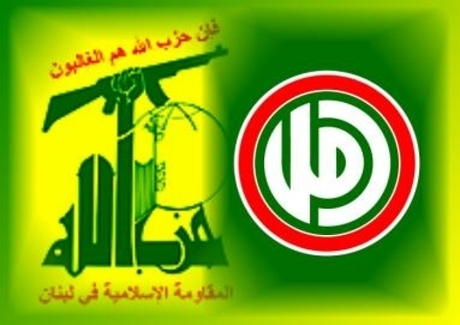 The “Shiite duo” Hizbullah and AMAL Movement were reportedly dismayed by the technique used by security and military forces when protesters a day earlier blocked routes leading to the parliament, al-Joumhouria daily reported on Wednesday.

Sources close to the “Shiite duo” told the daily that “security and military forces ensured protesters’ right to protest, but did not ensure the lawmakers’ right to reach the parliament," session that was set to convene.

They said the “leniency of official bodies regarding behavior of demonstrators in Downtown Beirut contradicts a decision preventing road blockages that was recently announced by a senior military official.”

The source was indirectly referring to remarks of Army Chief Gen. Joseph Aoun.

On Sunday, Aoun said that the closure of roads by protesters was "unacceptable." He also said they have the right to protest.

“The demonstrators blocked roads to a parliamentary session that would have discussed laws responding to some of their legitimate demands,” deplored the source.

Angry protesters besieged the parliament on Tuesday forcing to stop lawmakers from attending a session they deem as "unconstitutional".

The session, postponed for a week due to pressure from the street, was due to discuss draft laws which critics charge would let corrupt politicians off the hook.

...and The “Shiite duo” did not block roads and downtown Beirut for 2 years! Berri closed Parliament for 18 months but according to The “Shiite duo” that did not contadict with the lawmakers’ right to reach the parliament,"!

Sure they are dismayed, their prefer to have dozens killed per day as in Iran. This is how the Basij operate. This is their orders. News for them, the main beneficiary of this revolution is the Shia community left destitute by their leaders. Hizbollah is a foreign occupation army, and Berri is a great impostor. Ih Imam Saddr was still alive, we would be the first supporter of this revolution as the Green revolution in Iran.

Yup, memory of what they did is seared in our conscious forever.
Did someone not tell them that when the PRINCIPALS are present, they need no representative.
Parliament and MPs are supposed to be people's servants, not the other way around.

This is NOT Iran!!

The only laws they want passed are amnesty---probably because a lot of the people it affects are shia. What does that tell you?

Hey Hey Samiam, not just Shia... Sunni, Durzi, Christian ... THERE is not a Single politician of any Sect that did not steal!!! but Hey, Amal and Hizbebola Do not Represent the Shia Majority anymore... (use too but not no more!!!)

ALL Lebanese need to keep the pressure peacefully to remove these Hypocritical Scum out no matter their affiliation, they are all thieves!!

If they had their way they would deal with us protesters like the Iranians are dealing with them in Baghdad and Tehran.

But we are LEBANESE its not so easy here :)

The amnesty concerns 42.000 people. The very vast majority of them are shiaa, 1,200 are sunni extremists.

But of course, we have hundreds of MPs, Ministers, thousands of military, cops, customs officers all concerned. Not to mention staff at different ministries, from meliye to the local baladiye and also Bank du Liban crooks....

They all want the amnesty laws.

The culture of blood is dismayed by the relative lack of blood; nooo that cannot be true LOL.

Its not their business to tell the Army or security forces how to respond to the rioters this is not Iran and they do not set the nations rules!