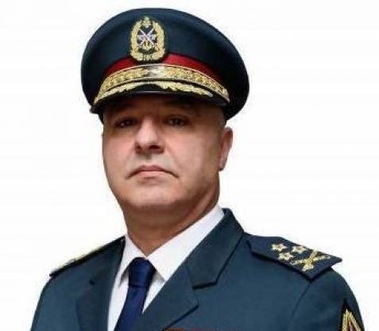 Army Commander General Joseph Aoun addressed the troops on Thursday saying their “vigilance foiled attempts of some to fish in troubled waters.”

Aoun in his Order of the Day, marking Lebanon’s 76th Independence anniversary praised the military’s conduct in light of nationwide protests ongoing for over a month demanding an overhaul of the political class.

“In these critical circumstances, you have done your duty with honor, sacrifice and loyalty, provided with the trust of your leadership and the support of your families. You have committed to your oath and have proved that the military establishment is an umbrella for all the people of the land,” said Aoun.

“You have carried out with professionalism and responsibility the task entrusted to you, although your military mission is to confront the Israeli enemy with its daily breaches of our sovereignty, demonstrating its ambitions in our land and waters; and terrorism, which is waiting for opportunities to strike civil peace and cause strife,” added the Army chief.

“Your vigilance in addressing this crisis responsibly and with professionalism has foiled the attempts of anyone wishing to fish in troubled waters,” he said

Aoun concluded: “Stay away from rumors and do not let political disputes discourage you from performing your duties or affect your morale.”

Just like the mafioso joe Aoun , I praise the soldier who shot the peaceful demonstrator last week, who obeyed the order of his colonel sitting next to him in the civilian SUV.
I also praise the army for the huge number of checkpoints they set to harass drivers and passerby but I command the army for the huge number of wars it won since the inception of Lebanon. It successfully repelled Syria, Israel, the Iranians not to mention the armed Palestinians in and out of the camps. Respect !

I also praise the army for its wealth, owning hotels and resorts is very..... chic. If you know an officer, you can always accompany him to the hamem el askari, but if you can’t you can always book a night at the Monroe courtesy of the LAF.

Enough sarcasm... Even though there's some elements of truth you sound like an inbred moron. The army with all it's flaws is Lebanon's last hope.

You’re so retrograde. Lebanon doesn’t need a costly and useless army. All it needs is a strong police force with elite swat teams. Our glorious army has never won anything because we’re surrounded by too powerful neighbors backed by even more powerful nations like Russia or the US. Regardless of how many billions of dollars in aid we get, we’ll never be able to defend ourselves from them. A strong police force and an international consensus to disarm Hizbala terrorists is all we need. The LAF is corrupt !

Panama, Costa Rica, Iceland, Andorra, Liechtenstein and a dozen smaller countries don’t have armies yet here they are, they don’t suffer from terrorism and nobody invades them.

None of the countries you mentioned are currently threatened by a mutant religious cult or expansionist neighbors.
The need for elite swat teams is a must but the need for an army in Lebanon is even greater.
Hitler did not attack Switzerland or Sweden because as neutral as they are, they have very lethal armed forces.

GOTHC my first question would be why do we need an army? Is it to fight Israel? and how has our illustrious army faired doing that in the past 50 years? please remind us all about the many victories they have had in fighting Israel? Im just guessing you were not around to see how the Army was misused in the days of the past and throughout the civil war not to mention today's beating of protesters?
This is the same Army that stops people on an expired insurance form yet looks away when the Za3em or Kizb moves an armed battalion behind them. The soldiers are not to blame as most do not know better but their officers who drive around in new BMW's and their leadership needs to be checked. And you dont do that by glorifying them either. We all want an army of the people that serves and protects the people when that does not happen then its not the peoples army.