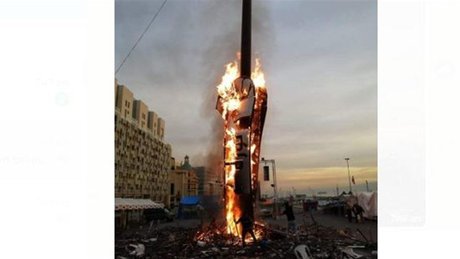 An unknown assailant on Friday torched the large clenched fist with “revolution” written on it that demonstrators raised at Martyrs’ Square in Central Beirut.

Some demonstrators in Martyrs’ Square, sleeping in tents since the start of the demos, rushed to extinguish the fire but failed.

The “fist” has become a symbol of the Lebanese uprising amid nationwide protests ongoing since October 17 demanding an overhaul of the entire political class.

Lebanon was marking 76 years of self-rule on Friday, but protesters say that only this year are its people experiencing "real independence".

Must be a Saudi/Israeli/American agent or not?

assailant on a "motorcycle" no doubt heading south

copy pasting the same message and posting it multiple times i called spamming!

The new fist has its middle finger raised and directed towards a popular suburb in Beirut.