US Officials Meet with Strongman to End Tripoli Offensive 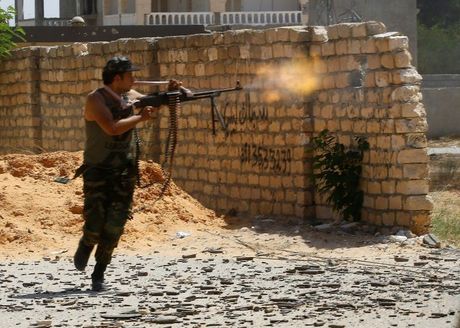 Senior US officials met with Libyan strongman Khalifa Haftar Monday to discuss steps toward ending his offensive on Tripoli, and accused Russia of exploiting the conflict, the State Department said.

The delegation, which included the US ambassador to Libya Richard Norland, aimed to establish "steps to achieve a suspension of hostilities and a political resolution to the Libyan conflict," the statement read.

The officials underscored full US "support for the sovereignty and territorial integrity of Libya and expressed serious concern over Russia's exploitation of the conflict at the expense of the Libyan people."

The discussions built on talks held by a delegation from Libya's fledgling unity government in Washington earlier this month.

"These include concrete efforts to address militias and extremist elements, and the distribution of resources so they benefit all Libyans," the statement said.

Haftar in April launched an offensive to seize Tripoli that has killed more than 1,000 people.

Russian mercenaries have been reported to be fighting on the side of Haftar's self-styled Libyan National Army.

The New York Times reported earlier in November that the fighters were believed to be controlled by an ally of President Vladimir Putin, an allegation denied by Moscow.

Washington first accused Russia of exploiting the conflict in Libya after the November 14 meeting with Libyan unity government representatives.

Western powers have sent mixed signals with France and Italy welcoming Haftar for visits and Trump after a phone call hailing his role in "fighting terrorism and securing Libya's oil resources."

But the United States later distanced itself from Haftar and joined calls for a ceasefire.

Haftar enjoys strong support from Saudi Arabia, Egypt and the United Arab Emirates, which appreciate his opposition to the Muslim Brotherhood, the broad Islamist movement across the Arab world.

AFP has committed journalism in this piece to the shame of Patriarch Napoleon IV and his entire family.
If the US officials followed US administrations' previous interpretations of international law, they would have arrested Mr. Haftar and delivered him to justice. Now they seem to be cringing and crawling. Now that we have a secretary of defense, we need a secretary of state.