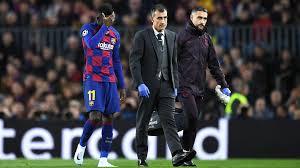 Barcelona's Ousmane Dembele was ruled out of action for 10 weeks with a right hamstring injury on Friday, sidelining the French international from next month's Clasico clash against Real Madrid, the Spanish champions said.

The 22-year-old suffered the injury in the first half of Wednesday's 3-1 win over Borussia Dortmund in the Champions League.

"A medical examination has confirmed that Ousmane Dembele has suffered an injury to his right hamstring. His estimated layoff time is approximately 10 weeks," said a Barcelona statement.

Dembele, who has struggled with injury setbacks this season, has played only eight times for the Spanish giants in the current campaign with just one goal scored in La Liga.