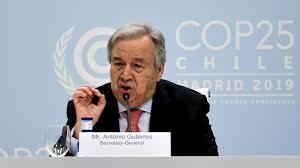 Devastating impacts of global warming that threaten humanity are a pushback from Nature under assault, UN chief Antonio Guterres warned Sunday ahead of a key climate conference.

"For many decades the human species has been at war with the planet, and now the planet is fighting back," he said, decrying the "utterly inadequate" efforts of the world's major economies to curb carbon pollution.

"We are confronted with a global climate crisis and the point of no return is no longer over the horizon, it is in sight and hurtling towards us."

Guterres flagged a UN report to be released Tuesday confirming the last five years are the warmest on record, with 2019 likely to be the second hottest ever.

Human health and food security are at risk, he added, noting that air pollution associated with climate change accounts for seven million premature deaths every year.

The Paris Agreement calls for capping global warming at under two degrees Celsius, but recent science has made clear that the treaty's aspiration goal of 1.5C is a far safer threshold.

A U.N. Environment Program report last week concluded that CO2 emissions would need to drop a vertiginously steep 7.6 percent per year over the next decade to stay within that limit.

But Guterres insisted that the 1.5C goal is doable. All that is missing, he said, is political will.

"Let's be clear -- up to now, our efforts to reach this target have been utterly inadequate," he said. "The world's largest emitters are not pulling their weight."

Current national pledges -- if carried out -- would see global temperatures rise by at least 3C, a recipe for human misery, according to scientists.

The U.N. chief's comments were clearly aimed at the handful of countries responsible for more than half of global greenhouse gas emissions, though he did not call them out by name.

President Donald Trump has set in motion the process that will see the United States withdraw from the Paris deal by year's end.

At the same time, a U.S. Congressional delegation going to Madrid will be headed by House Speaker Nancy Pelosi, listed by the Spanish government among heads of state and VIPs.

"We want to give every opportunity to the US to remain within the commitments in the fight against climate change," a spokesperson for the Spanish prime minister's office told AFP.

Other major emitters -- China, India, Russia and Brazil -- have given scant indication that they will deepen their commitments in the near term.

Guterres did single out the European Union as playing a constructive role.

"Europe has an absolutely essential role to play, and must be a cornerstone in the global negotiations leading to carbon neutrality," he said.

The European Commission's new president Ursula Von der Leyen is trying to steer the bloc towards a target of "zero net emission" by 2050, but continues to face resistance from members such as Poland and Hungary.

Despite growing public pressure for decisive action, the 12-day negotiating session is likely to remain technical in nature, focused on finalizing the "rulebook" for the Paris Agreement, which becomes operational at the end of next year.