Ronaldo Rescues a Point for Juve against Sassuolo 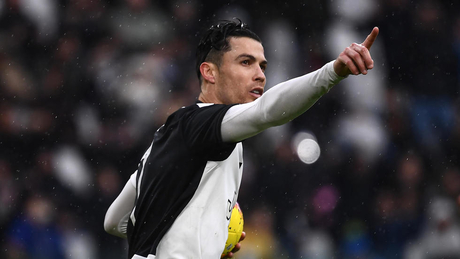 Cristiano Ronaldo scored from the spot to rescue a 2-2 draw for Juventus at home against Sassuolo to leave the way open for Inter Milan to claim top spot in Serie A later on Sunday.

Leonardo Bonucci had scored early for the eight-time reigning Serie A champions but Jeremie Boga and Francesco Caputo hit back for Sassuolo before Ronaldo's point-saving intervention.

Juventus have a two-point lead on top of Serie A but now can be overtaken by Inter Milan, who host struggling SPAL.

Sassuolo claimed their first ever point at Juventus and handed Maurizio Sarri's unbeaten champions their third draw of the season.

The side from Emilia-Romagna, are 12th in the table.

Eighteen-year-old Stefano Turati made an impressive debut in the Sassuolo goal, and pulled off a string of fine saves, denying Ronaldo, Higuain and Dybala late.

But Juventus counterpart Gianluigi Buffon had a difficult game in Turin as the 41-year-old, making just his fifth start this season, had a role in Caputo's goal just after the break.

Bonucci had gotten Juventus off the mark with a long-range effort on 20 minutes.

But three minutes later Boga pounced on a Caputo cross sending in past an out-rushing Buffon from an angle.

Back after the break Caputo added a second for the visitors following a mix-up between Juan Cuadrado and Matthijs De Ligt in the Juventus defense, with Buffon then fumbling the effort as it slipped into the back of the net.

Turati got down low to deny Higuain after getting his hand to send a Ronaldo free kick over the bar.

It was the Portuguese star's fifth Serie A goal this season.

Conte will bring the glory days back to Inter