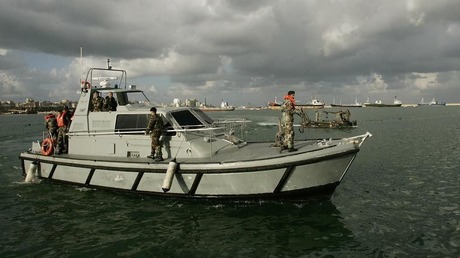 Lebanon's army on Sunday said it stopped a boat carrying 34 Syrian refugees who were trying to leave the protest-hit country.

It stopped the boat near the coast of the northern city of Tripoli on Saturday, it said in a statement.

The army said it arrested a Lebanese citizen who was trying to smuggle them out of the country, adding that there were five Lebanese on board the vessel.

The boat's final destination was not immediately clear.

Lebanon, a small Mediterranean country of some 4.5 million people, says it hosts around 1.5 million Syrian refugees.

Those escaping Lebanon by boat have often tried to cross into Europe through Turkey or Cyprus, some 100 kilometres (62 miles) away.

In October, Lebanon said it agreed to work with Cyprus to prevent migrants from reaching its shores.

Lebanon has been rocked by unprecedented anti-government protests since October 17.

The country's deeply divided political parties have yet to form a new one.

Lol that makes sense the Army stopping people for leaving to attain a better life?! There are 2 'ifs' here, one if these Syrians had money then our dictator in Baabda would sell them a Lebanese citizenship. Secondly if we had a president instead of a dictator then he would be looking into providing opportunists for Lebanese to have them work instead of leaving for their daily bread.

Alas having a dictator negates the ifs and the logical thing is for the army to stop people from leaving that seems to work better for their leader.