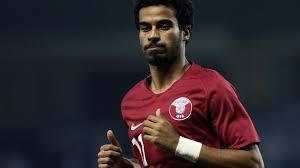 Barcelona legend and Al Sadd coach Xavi backed hosts Qatar to make an impression at the next World Cup after exciting forward Akram Afif was named Asian player of the year on Monday.

Doha-based Xavi, who collected the award on Afif's behalf at the Asian Football Confederation awards in Hong Kong, said the Qataris would be competitive in 2022 "for sure".

Japan's Saki Kumagai was rewarded for a glittering career for club and country as she was named women's player of the year at the ceremony in protest-hit Hong Kong.

Afif, 23, made a record 10 assists as Qatar stormed to their first Asian Cup title in February, reaping the rewards of heavy investment in their national set-up as the World Cup looms.

"I think they are working very well, they are competing against very big countries," Xavi, who won the 2010 World Cup with Spain, said of Qatar.

"They are working really well and they can compete in 2022 for sure."

Afif, who beat Iran goalkeeper Alireza Beiranvand and Japan defender Tomoaki Makino to the honor, is the second Qatari in a row to win the men's prize after defender Abdelkarim Hassan last year.

His award comes exactly nine years after Qatar were named as surprise World Cup hosts, a move that was followed by vote-buying allegations and a shift to the winter to avoid the Qatari summer heat.

"Very happy to be selected as the Asian Player of the Year. This is a great honour for me," tweeted Afif, who is playing at the Gulf Cup in Qatar.

Kumagai, 29, has established herself as one of the greats of women's football after she scored the winning penalty in Japan's 2011 Women's World Cup victory.

She then helped the Nadeshiko finish runners-up at the 2012 Olympics and 2015 World Cup, and led her country to the Asian Cup title last year.

"I've been nominated a few times before, at last I'm able to win this award this year. I'm genuinely happy. I want to thank my team-mates who helped me to get this award," said Kumagai.

"As an individual inspiration I'm only thinking about playing well for my club Lyon," she added, when asked about her next goals.

"And also we have the Tokyo Olympics coming up next year which I think is one of my goals which I want to achieve so I have to perform in order to get any further individual trophies I think."

Japan's Asako Takakura was women's coach of the year for a record seventh time, while Chung Jung-yong was the best men's coach after he led South Korea to the Under-20 World Cup final.

With the top men's award off-limits to anyone based outside Asia, South Korea's Tottenham Hotspur star Son Heung-min was named international player of the year.

The awards ceremony took place in Hong Kong despite widespread pro-democracy protests that have engulfed the Chinese territory this year.